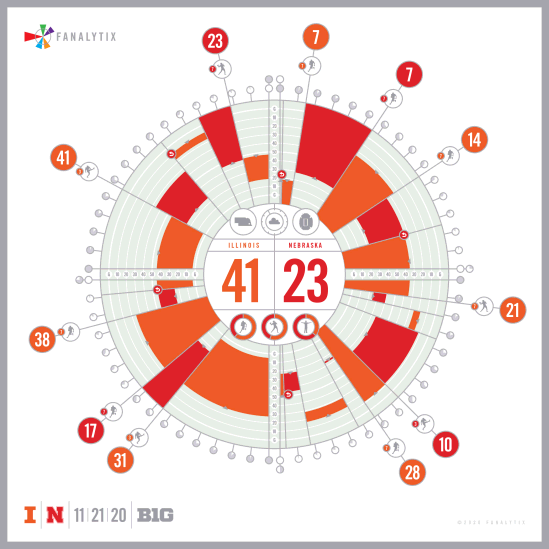 Nebraska committed five turnovers, and visiting Illinois converted the miscues into 24 points as the Huskers fell to the Fighting Illini 41-23.

The Huskers mustered 392 yards of total offense but still slipped to 1-3. Redshirt freshman quarterback Luke McCaffrey rushed for 122 yards and two touchdowns on 26 carries while adding 134 yards on 15-of-26 passing. But the young Nebraska quarterback also threw three interceptions and fumbled on the game’s first play from scrimmage.

That fumble, a short throw that was ruled a lateral and a fumble, was recovered by the Illini’s Jake Hansen to set a strange tone for the game. Three plays and 21 yards later, Illinois was in the end zone after Chase Brown’s three-yard scoring run just 1:29 into the game.

The Fighting Illini, who improved to 2-2, finished with 490 total yards, including 285 on the ground and 205 yards passing.

Frankly, at times the Huskers looked like a team completely unfamiliar with football.

Some of the shots and arrows will come from inside Nebraska and the fan base. They want to believe. But they’re tired. Everyone is tired of this.

After this type of result, I become really confused as to how Frost can sell the notion that his rebuilding job at Nebraska is moving in the right direction.

This is about execution, both on the players’ side of things and on the part of the coaches.

There are no excuses for this one. NU was not mentally or physically ready to play vs. Illinois, and that is simply inexcusable.

We’ll see where Illinois goes from here, but Nebraska appears to have sunk to rare depths Saturday. Football hell, you might say.

Luke McCaffrey is definitely a ball of dynamite when he's got a path to run, but the distance to travel in the passing game remains significant.

Losing like this? ... It’s not something that often-used platitudes from the coaching staff and players can fix.

The Huskers are not at a place as a program where they can just show up and beat teams in this league without full preparation.