Cam Taylor-Britt goes high to break up a long pass late in the game. 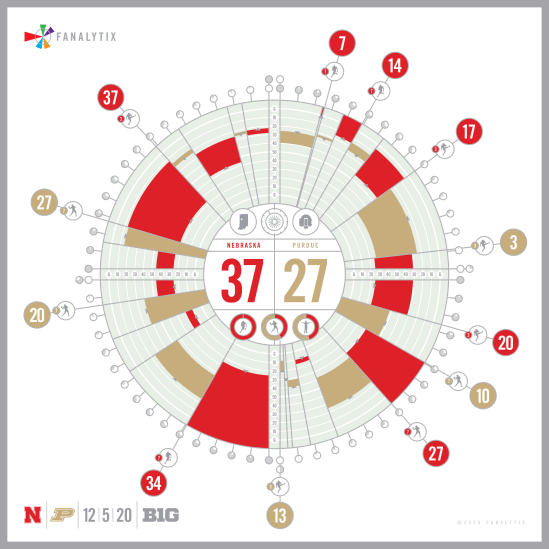 Nebraska got off to a great start on the road, then made enough plays down the stretch to earn a 37-27 win over Purdue.

Nebraska got contributions in all three phases of the game to improve to 2-4 on the season while dropping Purdue to 2-4. The Huskers jumped out to a quick 17-0 lead less than 10 minutes into the game, sparked by an opening defensive stop followed by a blocked punt.

The punt, blocked by Levi Falck, was recovered by Simon Otte at the Purdue 1, setting up a one-yard Dedrick Mills touchdown on Nebraska’s first offensive play of the game to give the Big Red a 7-0 lead.

The Blackshirts came through with a quick three-and-out on Purdue’s second offensive possession, and Cam Taylor-Britt’s 27-yard punt return combined with a 15-yard Purdue penalty set the offense up with 1st-and-10 at the Boilermaker 17. Three plays later, Adrian Martinez battled to the end zone from 13 yards out to give Nebraska a 14-0 lead less than five minutes into the game.

By showing a bit of mental toughness, the Big Red gave itself an opportunity to stay out of the Big Ten West basement this season. Baby steps.

This was a Husker team that fans have wanted to see all along. And it was there all along.

Say what you want about the aesthetics of this particular Nebraska win. However, the Huskers did come to play.

You know this team's flaws, but it needed this bowl of chicken soup, as the Huskers made the most out of the parts they had.

The key stat of the day for Nebraska's offense was they had no interceptions or lost fumbles.

Nebraska’s offense is starting to hum in ways it hasn’t this year.

Nebraska held Purdue to 3-of-13 on third down, a hint of strength in what had been the Huskers’ biggest weakness to this point.

Early leads, while nice, aren’t necessarily safe with a Nebraska team still learning how to put opponents to bed.

Appreciate Nebraska football for what it is: a three-hour circus of unpredictable skits, roughly 30 seconds apart.