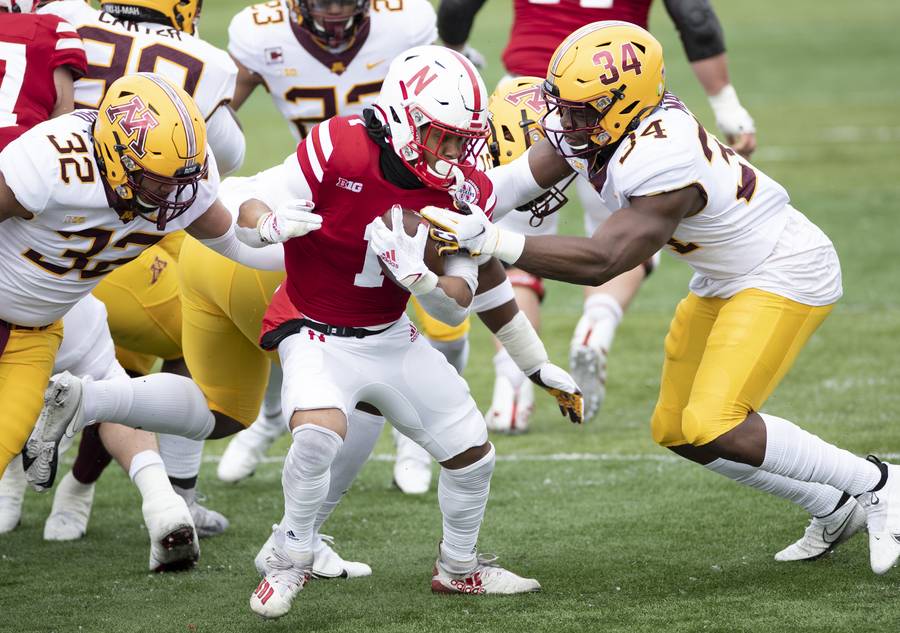 Huskers.com
Wan'Dale Robinson was harassed by Minnesota whenever asked to run wide.
By Tad Stryker on 12/12/2020

Many years from now, when archaeologists sift through the rubble of Nebraska’s 2020 football season, maybe they’ll find evidence of improvement in what is commonly known as Scott Frost’s Nebraska offense.

If those future scientists are determined and dig deep enough, they’ll find some. Just a week ago, there seemed to be a growing body of evidence. There are reports of people who watch the team live on TV each week sometimes observing it (you’ve got to admit, Cam Jurgens looks better snapping the ball the last couple of weeks), but those reports are irregular and fleeting.

If sportswriters were allowed at NU practices, it might be possible to do objective research that would confirm the claims made by Frost after Nebraska’s 24-17 loss to Minnesota, claims of sharper execution of his spread option in the Hawks Championship Center on a week-by-week basis. Since there’s no such access, it pretty much comes down to the word of Frost and his offensive coordinator, Matt Lubick.

Those of us left to judge by on-field results are at a disadvantage. We have to go with what we see, which is a team utterly unable to string together two steady performances.

Indeed, few societies known to man have shown as much propensity to erase signs of their own advancement as Frost’s offensive platoon. Centuries hence, an enterprising scientist well may trace the offense’s malaise to the lack of a cohesive plan, and a fuzzy focus among Frost, Lubick, quarterback coach Mario Verduzco and offensive line coach Greg Austin. I find it harder each week to justify bringing back Austin and Verduzco next season.

Possibly some brilliant scholar will find evidence that halfway through the final regular-season game, Nebraska was at a crossroads: trailing 17-14 to a badly COVID-19-depleted Minnesota team. All the Huskers needed was put together one slightly-above-average half of football to set themselves up for a stirring late-season run and a winning record for the first time in four years. Unfortunately, as it did for most of its previous 18 games stretching back to September 2019, the offense tried to do a little of everything, and did none of it well.

Even harder to explain is why Frost’s junior quarterback, Adrian Martinez, and his teammates looked so complacent as they squandered opportunities handed them by their counterparts on the Husker defense. Did a missed field goal by normally-reliable Connor Culp hurt? Yes, it did. Did an unjustified holding call on freshman Ethan Piper — which nullified a touchdown run by Martinez — radically change the final five minutes of the game? Absolutely. But the Huskers should never have been in the predicament they made for themselves, which made those seven points so precious.

The second-half touchdown is an endangered species in Lincoln. The Cornhuskers have produced just four of them in 14 quarters this season. And frankly, the first half hasn’t gone so well lately either, especially in home games. Frost’s offense allegedly is built to win games by scores like 35-21 or 42-28, but since halftime of the Penn State game, it has scored just 43 points in the past 10 quarters at Memorial Stadium.

Playing Minnesota was supposed to help solve that, if for no other reason than the Gophers came into the game 33 players short, due to COVID-19 protocols. Why the Huskers couldn’t consistently run the ball against one of the nation’s worst run defenses is perplexing, but not as maddening as why the Huskers WOULDN’T run the ball consistently against one of the nation’s worst run defenses. The Gophers were rated 111th in the nation, allowing 6.6 yards per carry. The Huskers weren’t doing that badly, averaging 5.5, but they could have had so much more than their final tally of 197 yards on the ground. Mills, who gained 50 yards, carried the ball only 12 times. Why? Frost said after the game that injuries were not the reason. Instead, the Huskers relied on the pass, and Martinez failed to deliver, twice missing wide open downfield passes to Oliver Martin and Robinson that cost Nebraska a likely 10 points in the second quarter.

Even the undersized Robinson did well when he ran between the tackles, but he rarely got that opportunity. Why the reluctance to stick with the run, especially with Martinez completing just three of 11 passes after halftime? Why, especially when Austin, the run game coordinator, said before the season that a good north-south run game would be important? It brings to mind one of my grandpa’s maxims, “Saying and doing are two different things.”

Former Husker o-lineman Jeremiah Sirles, now with the Husker Sports Network, sounded incensed on the postgame show, and openly questioned NU’s lack of commitment to the run. “Every time we think we hit rock bottom, it seems like we take a shovel and dig ourselves into a deeper hole,” Sirles said.

There’s no denying that Nebraska’s offense is young, but young teams improve when they have consistently good coaching. There’s very little evidence of that in Lincoln this fall. Erik Chinander’s defense has improved. When you look at how defensive linemen Casey Rogers and Ty Robinson have done compared to offensive linemen Ethan Piper and Bryce Benhart, I gave Rogers and Robinson a clear edge. When you compare the development of linebackers Luke Reimer and Nick Henrich to receivers Zavier Betts and Alante Brown, there’s no question that Reimer and Henrich are much farther down the road than they were in October.

If you’re not going to bench the underperforming Matt Farniok and go full-scale youth movement, why not let Farniok do what he does best — block straight ahead? That might have helped freshmen Piper and Bryce Benhart as well. And why not try sixth-year senior Christian Gaylord in the o-line in the second half? It’s baffling.

The Huskers’ lack of success almost forces their fan base to ask, “How exactly has this offense improved since last year?” Its stock was much higher at halftime of the Ohio State game than it is now. And think about how you rated the NU quarterback room then, compared to now.

It seems amazing, but the Huskers had an opportunity to vault all the way into third place in the Big Ten West with a win. Instead, they projected to the nation an erratic, irrational fear of leaving the conference basement.

The only consistent thing about this season is the increasingly unconvincing rationalizations by Frost in postgame press conferences. The lack of execution, the untimely penalties and turnovers are weekly themes, things “we have to get fixed.” From all indications, the Huskers are a bunch of great young men who know how to get it done in practice, but not in games. So that is progress?

“We had our best week of practice offensively maybe since I’ve been at Nebraska,” Frost said after this one. That makes nobody feel better.

Time to walk the walk when it counts.