Adrian Martinez is sacked at the Iowa 46. The Hawkeyes recovered the ball to seal their win. 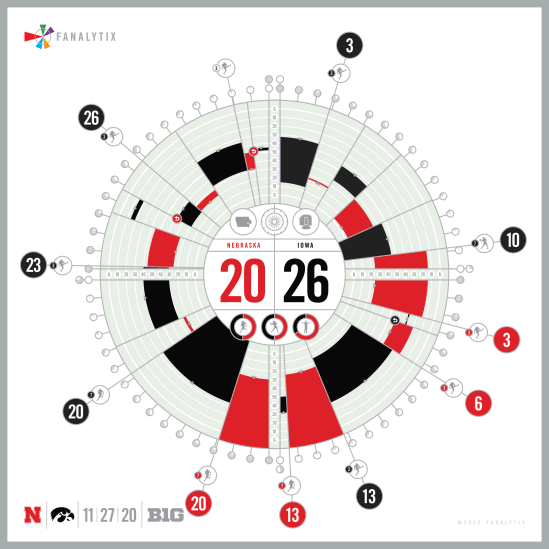 In a back-and-forth game from start to finish, No. 24 Iowa scored the game’s final 13 points to hand visiting Nebraska a 26-20 loss at Kinnick Stadium.

Nebraska rallied from a 10-0 first-half deficit to take a 20-13 lead following a touchdown on the opening drive of the second half.

The Huskers took the lead on running back Rahmir Johnson’s first career touchdown, a 12-yard burst that capped an eight-play, 70-yard march. But Iowa answered the Husker touchdown with seven points of its own to tie the score at 20 heading to the fourth quarter.

Two fourth-quarter field goals gave Iowa a 26-20 lead, and the Hawkeyes had a chance to seal the win on a 51-yard field goal attempt with just over two minutes left, but the kick hit the crossbar to give Martinez and the Huskers one more shot.

Martinez drove the Huskers to the Iowa 39, but on first-and-10 he was hit by Chauncey Gholston while dropping back to pass. The ball popped loose and was caught by Iowa’s Zach VanValkenburg for a game-sealing fumble recovery at the Iowa 48.

On offense and special teams, Frost has become too tolerant of players who are liabilities in games that are within grasp.

Taking the next step is hard when you keep tripping over your own shoelaces.

There were a lot of things to like about the way the Huskers played against Iowa on Friday, but once again two or three small things continue to be the difference.

Successful teams put an incredible amount of energy into the details so as to avoid the sort of errors that once again doomed Nebraska.

That remains the defining feature of the Huskers since Frost arrived in 2018—playing well enough to win, yet finding a way to lose.

It seems like this season’s losses have all followed the same script, with a different unit shouldering the blame each time.