John Konstantaras
Dedrick Mills stretches for the Huskers' only touchdown of the day. 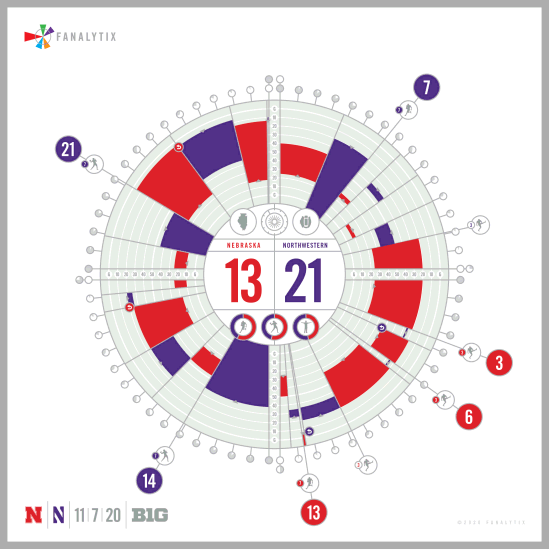 In another game between Nebraska and Northwestern that went down to the wire, Luke McCaffrey’s pass to Wan’Dale Robinson fell incomplete as the Wildcats escaped with a 21-13 win.

Nebraska lost despite putting up 442 yards of total offense and 28 first downs against Northwestern while holding the Wildcats to 317 total yards.

The Huskers led 13-7 at the half, but Peyton Ramsey threw a pair of second-half touchdowns passes for Northwestern, including a 10-yarder to Riley Lees with 9:53 left.

Nebraska had two chances to get the tying score but couldn’t crack the end zone. McCaffrey drove the Huskers inside the Northwestern 5, but Chris Bergin’s interception ended the threat.

After forcing a punt, the Huskers got the ball back at their 8-yard line with 2:14 remaining. NU eventually got the ball to the Wildcat 14, but McCaffrey’s incompletion on fourth-and-4 with five seconds left ended the Huskers’ chances.

Nebraska’s only touchdown of the day came after Myles Farmer picked off a Peyton Ramsey pass in the second quarter and returned it to the Northwestern 3.

Frost's offense has become a parody of itself under Adrian Martinez, who can pile up statistics but has a devil of a time getting his team into the end zone.

It’s not time to overreact given the short season, but what we saw Saturday begs a question: Is it time to play for 2021?

You too often come away from these games thinking the opponent was more poised and even worse, more hungry.

If there was something the Huskers knew they could execute and knew would work, it didn’t show up on Saturday.

It's going to be hard to consistently win in the Big Ten when 67 percent of your rushing offense comes from QB runs and scrambles.

At some point, you have to maximize what you have, and clearly Frost isn’t doing that.

Saturday was a sobering wakeup call for Nebraska, wasting an incredible defensive effort.