Deontai Williams' sack led to his own scoop and score. | Huskers.com photo 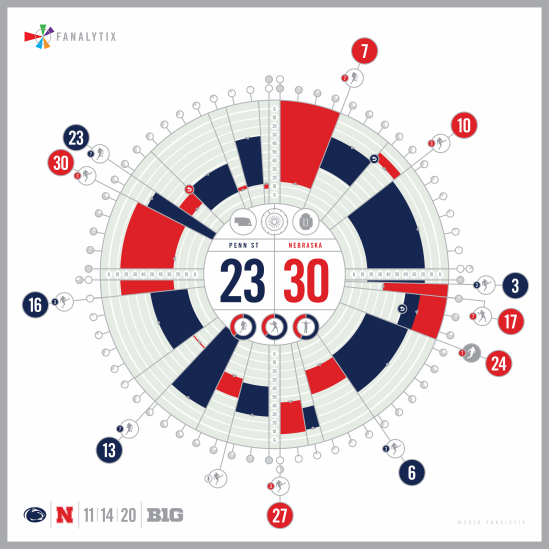 In a tale of two very different halves, Nebraska’s defense held on fourth down on back-to-back drives inside the Husker 11-yard line to secure a 30-23 win over Penn State at Memorial Stadium.

Nebraska’s impressive defensive stands in the final four minutes came after Penn State threatened to erase a 27-6 halftime advantage for the Big Red, which won its 2020 home opener to improve to 1-2 on the year. The Huskers sent the Nittany Lions back to State College with an 0-4 record.

The Husker defense put up heroic efforts from start to finish, but none were bigger than a Luke Reimers sack of Penn State’s Will Levis on 3rd-and-Goal at the NU 9 with 48 seconds left, as Nebraska held a tenuous 30-23 lead. The Reimers sack set up 4th-and-13, and senior defensive lineman Ben Stille put the exclamation point on the win with his hit on Levis to force a flailing, desperation toss that fell incomplete in the middle of the field.

Despite giving up 500 yards in 91 snaps, the Husker defense won this game; the offense simply avoided losing it.

This was Frost’s 10th win at Nebraska, hardly a distinguished list. But by far it’s his best win. A much-needed win.

This win was so difficult for Nebraska to come by, it almost felt like it had to beat Penn State twice.

This win ... came in the way that so many Husker losses have come during the Frost era.

I loved the play call to freshman wide receiver Zavier Betts. It was straight out of the Bellevue West playbook and something he was very comfortable running.

Winning matters, even during a pandemic, especially after 357 days without success.

Nebraska ended up winning against Penn State where it lost against Northwestern — in the red zone.