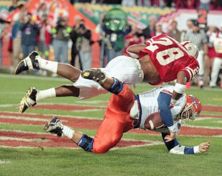 The entire country was anxious to see if Nebraska’s “Bump and Run” defense could keep up with the “Fun and Gun” and whether Florida could stop the nation’s premier rushing force.

The result was a 62-24 dismantling of Florida, and it didn’t take long. For a quarter, it looked as if it would be a ball game. Two lead changes occurred and Florida led 10-6 after one period. But Nebraska scored 29 unanswered points in the second quarter, much to the delight of the more than 40,000 red-clad fans. The 29 points were the most ever scored in the second quarter of a bowl game.

Afterward, coach Tom Osborne confirmed what everyone in attendance knew, when he said, “There is still a place in college football for a running quarterback.” Indeed, Tommie Frazier rushed for 199 yards and two TDs on 16 carries. His yards were Nebraska bowl and Fiesta Bowl records for most yards rushing and set an NCAA bowl record for most yards rushing by a QB.

“We saw in the film that when Nebraska ran a lot of non-option plays, teams were there but they just couldn’t make the tackle. Danged if that didn’t happen to us too.” • Finally, an NCAA Super Bowl
• Continuation of story above

• Desert Storm: In a match of opposites … Gators will prevail

• Duel in the Valley of the Sun

• All Eyes on Phillips as Huskers Get Ready*

It was with startling ease that the Huskers outplayed, outworked, outblocked, outtackled, outran and generally outclassed the latest jugger-not from the state of Florida.

Revel in the season. Celebrate the victory. You've seen the best team that Nebraska ever put on the field.

Nebraska isn't merely the repeat national champion. It is one of the greatest teams of all time.

The postmodern attack of Spurrier was no match for the same offense they’ve been running in Lincoln for generations.

A fatal flaw was exposed by Nebraska’s pressure. Wuerffel began throwing balls he never had.

The dedication, the tenacity, the devotion of Nebraska fans was an omen of the stomping that was to follow in a long evening at the Fiesta Bowl.

Nebraska's greatest moment will always be tainted. The sad part is that it didn't have to be.