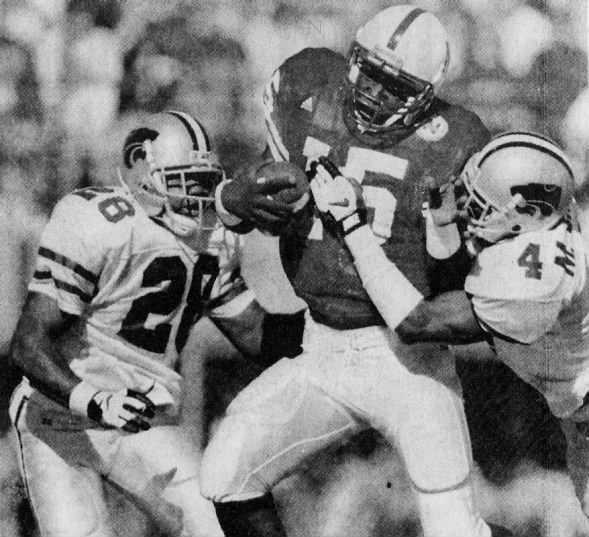 Nebraska faced its first major challenge of the year as Big Eight foe Kansas State entered the game 6-0 and ranked eighth in the nation. But the Huskers quickly showed the Wildcats why NU was the nation’s second-ranked team in both major polls, jumping to a 35-6 halftime lead and defeating K-State 49-25.

The Nebraska special teams set the tone for the game as Mike Fullman returned a punt 79 yards for a touchdown less than five minutes into the game. On the return, Husker Mike Rucker laid a devastating block on K-State’s Joe Gordon, which sent Gordon’s helmet flying five yards downfield.

After the Wildcats responded with a TD to cut the lead to 7-6, Nebraska dominated the remainder of the first half, scoring 28 unanswered points for a 35-6 lead. Included in the outburst were two Tommie Frazier TD passes and an interception return for a score by outside linebacker Luther Hardin. The Huskers built a 42-6 lead late in the third before substituting on defense and allowing the Wildcats 19 unanswered fourth-quarter points.

The Blackshirt defense held Kansas State to just 256 yards total offense, including minus-19 yards rushing. The game marked the fifth-best rushing defense effort by the Huskers and the 15th time in school history NU had held an opponent to negative yardage on the ground.

The Huskers applied constant pressure to the Wildcats, sacking K-State nine times for 82 yards in losses and posting a season-high 19 quarterback hurries. Linebacker Terrell Farley was a standout with 10 total tackles, including two sacks for 22 yards in losses.

Is Nebraska really that good? Or was Kansas State that overrated? Probably a little of both.

Kansas State may statistically have the nation's No. 1 defense, but it was Nebraska which came to play from the opening whistle.