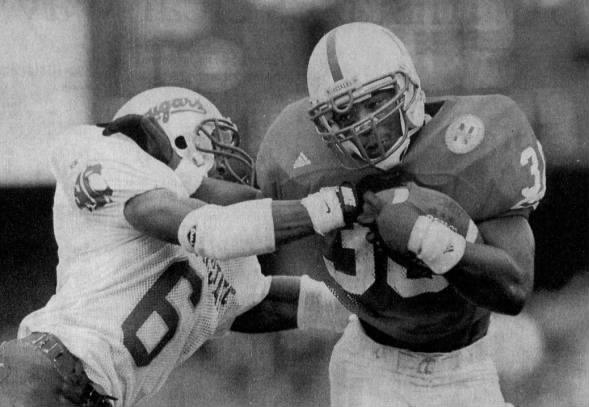 Washington State entered Lincoln as Nebraska’s toughest test of the season, but despite an early scare, Nebraska posted a 35-21 victory over the Cougars.

Washington State’s Frank Madu stunned the sellout crowd at Memorial Stadium with an 87-yard TD run in the first quarter, giving the Cougars a 7-0 advantage. The deficit was the only time Nebraska trailed in the 1995 regular season. It didn’t take long for Nebraska to regain control. NU scored 20 second-quarter points and took a 13-point lead to halftime.

The second-quarter outburst was keyed by quarterback Tommie Frazier and true freshman I-back Ahman Green. Frazier rushed for TDs of four and 20 yards in the quarter, while Green had three carries in the quarter for 114 yards. Green added a 3-yard run in the third quarter to give NU a 28-7 lead late in the period.

What do you give the team with everything? A game. A chance to see if it is really that good, or the opponents that bad. Saturday, the Huskers liked what they saw.

Maybe there could be a slot on the Heisman ballot that simply says 'Nebraska running back.'