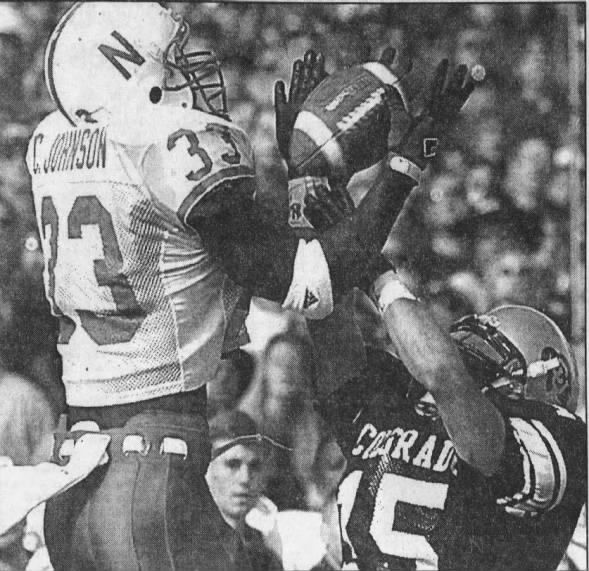 The Huskers scored on their first offensive play and never looked back as second-ranked Nebraska went on the road and soundly defeated No. 7 Colorado, 44-21.

Nebraska began its barrage less than two minutes into the game when freshman running back Ahman Green took an option pitch from quarterback Tommie Frazier and raced 57 yards down the left sideline for a touchdown. Colorado tied the game at 7-7 midway through the first quarter, but the Huskers responded with 14 points to lead 21-7 after a quarter.

Leading 24-14 late in the second period, Frazier orchestrated a perfect drive to end the first half and give Nebraska a comfortable 31-14 lead at intermission.

Nebraska answered Colorado’s final challenge after the Buffaloes closed within 31-21 midway into the third quarter. The Huskers responded with two Kris Brown field goals to lead 37-21 and scored a late touchdown for the final margin.

The Huskers committed no turnovers for the third straight game and no penalties in a game for the first time since 1976.

National championship. Tommie Frazier. On the best day of his career, Frazier showed how intertwined he and the prize of prizes have become.

What could distract the Huskers on the drive to Tempe? The most real possibility I see at this point is that Heisman hype could erode Frazier's focus.

The same well-worn adjectives applied to the Buffs for the fourth straight year against Nebraska. Outmanned. Outplayed. Outcoached.

Neuheisel's game plan was fine. The Buffs ... simply made too many mistakes on a day when nothing short of perfection would've sufficed.

Frazier has a history of playing well in big games. ... He was at his best here, manufacturing the big plays that fueled the Huskers' 467-yard performance.

The mere fact that Nebraska mixed in some passing with its national-leading rushing was enough to do in Colorado.