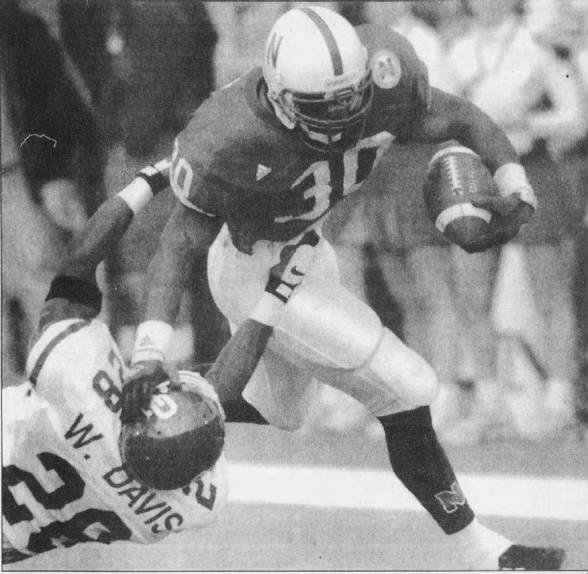 Two defensive touchdowns sparked a 37-0 victory for Nebraska as the Huskers registered their first shutout of Oklahoma since 1942 and wrapped up a third consecutive undefeated regular season.

It was a rough day for the normally potent Nebraska offense, which was kept out of the end zone for the first three quarters. Quarterback Tommie Frazier, playing on national television with a chance to impress Heisman Trophy voters, put up so-so stats: 35 yards rushing and 128 yards passing.

Nebraska’s Blackshirt defense made up for the offense’s struggles. The Sooners entered the game averaging 213 rushing yards but managed just 51. Oklahoma punted 10 times, and two of the Sooners’ three turnovers were returned for touchdowns.

The victory, in the final conference football game for the Big 8, secured a trip to the Fiesta Bowl for a shot at a second consecutive national title.

Nebraska took the opening kickoff and drove for a field goal to take a 3-0 lead. A 36-yard interception return by linebacker Jamel Williams extended the lead to 10-0, and a field goal made it 13-0 at intermission.

The Husker defense added more fireworks in the second half as safety Tony Veland scored on a 57-yard fumble return to give Nebraska a 20-0 advantage. After another field goal, the Husker offense scored its first TD early in the fourth quarter on a 38-yard pass from Frazier to Jon Vedral.

The Huskers capped the scoring with less than a minute to play when redshirt freshman Joel Makovicka scored from 17 yards out.

Kicker Kris Brown put his name into the record books, scoring 13 points on three fields goals and four PATs, giving him 97 points on the season. That mark established a new freshman scoring record at Nebraska, one point better than teammate Ahman Green, and set an NU record for points by a kicker in a season.

Frazier extended his career total offense record to 5,476 yards and posted his 32nd victory as a starter.

• Schnellenberger says he’s taking more heat than ever
• Don’t expect a ‘Game of the Century’ out of this otherwise classic rivalry
• King Barry was royal pain for Dr. Tom
• Huskers’ Frazier is thinking Heisman
• Huskers roll on despite problems and disputes
• This is the season that wasn’t for the Sooners
• Sooners don’t want to go this rout with Huskers

• A Broken Heart? It Isn’t Likely
• Osborne ‘Puzzled’ by Spread

The victory is always the thing with Frazier, always will be. And if he gets one more ... the sting of a lost Heisman will subside in the numbing joy of a second national championship.

Sometime during the past five years the rivalry died on its own. ... Already Husker fans had stopped gathering around the television with that awful mixture of anticipation and dread.

The 37-0 romp by the Huskers was not a fitting end to one of
the great traditions of Thanksgiving.