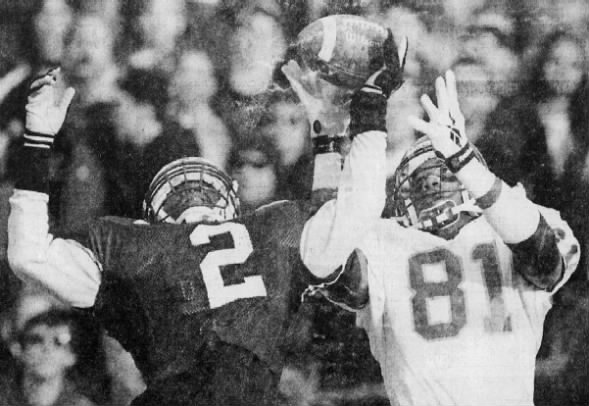 In its first week atop the college football polls, Nebraska demonstrated why it was the top-ranked team, rolling to a 73-14 victory over Iowa State in Lincoln.

The Huskers rushed for 624 yards, second-best in school history, and racked up 776 total yards, the fifth-highest by any Husker team.

The Huskers were nearly perfect on offense, scoring on their first 10 drives and 11 of 13 overall. Nebraska did not punt, and the Huskers went without a turnover for the fourth game in a row.

True freshman I-back Ahman Green continued to shine, with 176 yards on 12 carries and touchdown runs of 64, 26 and 17 yards. That gave him 997 yards on the season, breaking Calvin Jones’ freshman rushing record of 900 yards set in 1991.

Quarterback Tommie Frazier completed 10 of 15 passes for 118 yards and two TDs. He also ran for 62 yards and two scores. In the process, Frazier broke Steve Taylor’s quarterback record for rushing touchdowns with 34. Frazier also passed Taylor for career victories as a starting quarterback, improving to 30-3.

The Blackshirt defense, meanwhile, held ISU’s Troy Davis, the nation’s leading rusher, to more than 50 yards under his season average. Rover Mike Minter made six tackles, picked off one pass and broke up two others.

So many great stories on this team, so much to appreciate. And what do we get? Bernard Goldberg. ... Earth to CBS: Winning isn't the only thing at Nebraska, it's just a byproduct.

You can only wonder what will happen next Saturday at Lawrence, Kan., if the Huskers are inspired.

If you were looking for controversy, something dramatic in the form of protests over Phillips' return, you weren't going to find it here. At least not publicly.