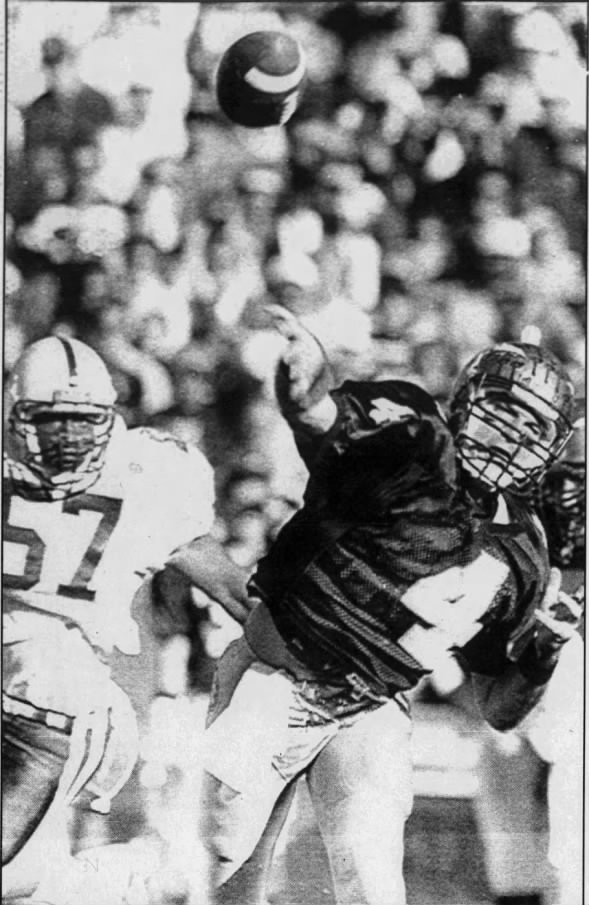 Billy Tom Willis gets a pass off in the first quarter as Nebraska’s Kenny Walker pursues. · The Record (Hackensack, N.J.) · Newspapers.com

After spotting the Huskers early leads of 7-0 and 10-7, Florida State ran off 34 consecutive points to build a 41-10 lead at the end of three quarters, then settled in for a 41-17 victory.

The Seminoles destroyed the Huskers with a lightning-quick defense and a passing attack the likes of which Nebraska had not seen in its first 100 years of football. Senior quarterback Peter Tom Willis threw for 422 yards, the most passing yards ever against a Nebraska team, as he completed 25 of 40 passes with no interceptions and five touchdowns.

If there was a turning point in the game, it came in the final three minutes of the first half. Leading, 14-10, Florida State had moved the ball to the Nebraska 35, but three straight holding penalties moved the Seminoles back to a first-and-40 at their 35. Two plays later, Willis converted on third-and-23 at the NU 48, finding fullback Edgar Bennett with a 30-yard pass for a first down at the Husker 18. Three plays after that, Willis tossed a 10-yard scoring strike to tailback Dexter Carter and FSU led at halftime, 21-10.