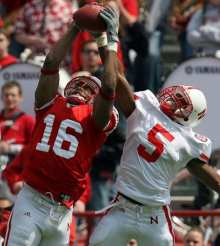 Quarterbacks Sam Keller and Joe Ganz put on spectacular passing displays as the Red team flew to a 38-0 victory over the White squad in Nebraska’s annual spring game.

The White team defense stiffened in the second half to hold the Reds scoreless with the help of a running game clock. For the game, the Red offense racked up 511 total yards, including 350 through the air, and scored on all six of its red zone opportunities. The Red defense also had a strong day, limiting the White team to nine yards total offense and -33 yards on the ground.

You get the feeling each quarterback believes at the very core of his being that he should be the starter — which is precisely what you want.

The game lasted one quarter too long, especially if I-back Marlon Lucky's knee injury turns out to be serious.