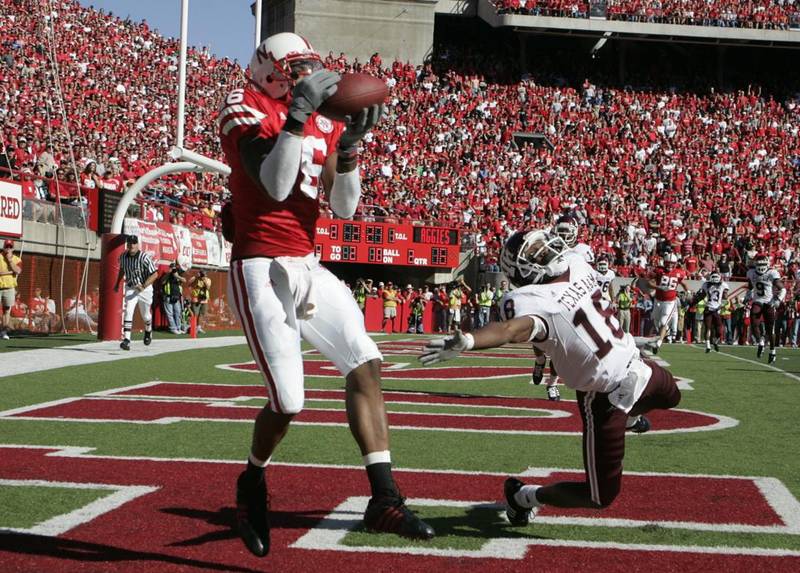 Maurice Purify catches a 10-yard pass from Sam Keller for a second-quarter touchdown. | Courtesy of Huskers.com

Marlon Lucky broke his own Nebraska running back record by hauling in 13 receptions for 125 yards, but it was not enough to offset a powerful Texas A&M running game as the Huskers fell to the Aggies, 36-14.

The Huskers trailed 16-14 at the half before Texas A&M took control in the third quarter.

Nebraska watched Texas A&M produce three long scoring drives to consume most of the second-half clock. The Aggie scored on drives of 80, 80 and 76 yards in the second half, eating up 15:40 on 34 plays on those drives.

The Huskers amassed more than 400 yards of total offense but coughed up three fumbles, while Texas A&M did not commit a turnover.

At least this week the players showed effort, particularly in the first half.

Huskerville simply felt like a much friendlier and welcoming place all of a sudden, and we don’t need a consultant from the East Coast to tell us why.

Steve Pederson is out, Osborne is in, and Nebraska still has a struggling football team.

Nebraska is slowly developing a decent running game. The problem is that Callahan seems scared to death to use it.

The Huskers face the likelihood of going the entire month of October without a win.

It's as if Kentucky football and Nebraska football have magically switched places, like in that ‘Freaky Friday’ movie.

Tales of caution abound concerning organizations hamstrung by clinging to the past.

The Aggies’ offensive attack probably brought back memories of days gone past for the old-timers at Memorial Stadium.

Callahan, I suspect, is going to have some further successes, but they won’t be in Lincoln.

Just relax. In about 5 weeks, the Husker football program will be headed in a different direction.

How ironic that we get smocked by the one thing that we used to kill people with, the option.