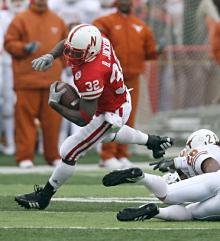 The first field goal attempt of Ryan Bailey’s career with 23 seconds left in the game gave No. 5 Texas a 22-20 victory over the No. 17 Huskers.

With three minutes left, Nebraska had the ball and a 20-19 lead. But a fumble after a third-down pass completion gave Texas the ball in Husker territory. Texas drove to the Husker 5, and Bailey kicked the 22-yard game-winner.

Nebraska drove to midfield in the waning seconds, but two last-ditch passes into the end zone were incomplete.

Nebraska had taken a 20-19 lead with a 25-yard pass from I-back Marlon Lucky to Nate Swift with 4:54 left in the game. The Huskers’ other scores came on a 63-yard pass from Zac Taylor to Maurice Purify in the first quarter and a 49-yard catch and run by Brandon Jackson on the first play of the fourth period.

This looked and felt like one of those big, big, big Nebraska-Oklahoma games we used to know. All the way to the heartbreak ending.

In boxing terms, Nebraska dropped a unanimous decision at USC. The Texas game was different.

Yes, the Longhorns won. But I think they realize the gap has been closed. I think they also know how lucky they were to win.

Most of the second-half moves paid off, including the Marlon Lucky-to-Nate Swift pass call.

There are precious few opportunities that will match the one Nebraska had Saturday.

Zac is a 5th year senior, but Saturday he was outplayed by a redshirt freshman, Colt McCoy.

When you have the defending national champions on the ropes, you deliver the knockout punch. If you don’t, then maybe prime time isn’t for you.