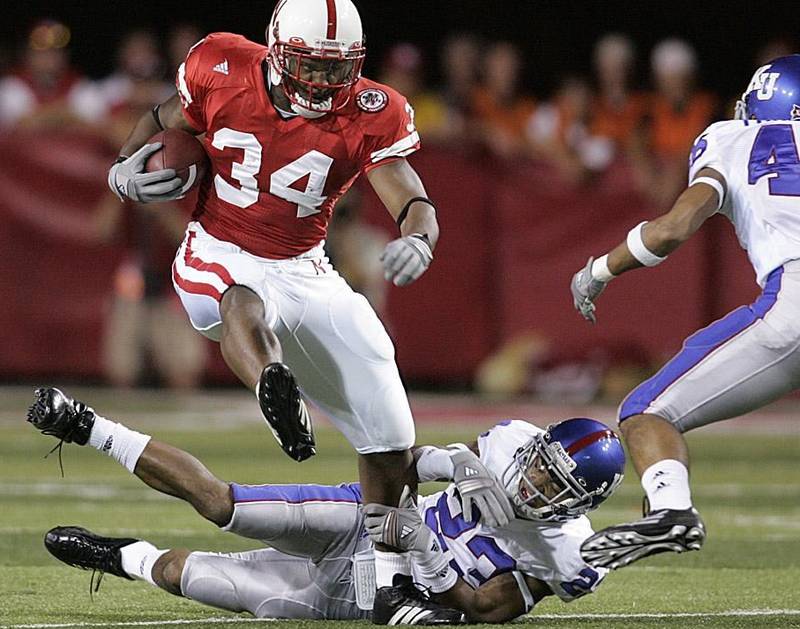 Nebraska sprinted to a 17-0 lead at the end of the first quarter and held off visiting Kansas by scoring the only overtime touchdown in a 39-32 victory.

Senior quarterback Zac Taylor threw for 395 yards and four touchdowns, including three scoring passes of 75 or more yards, to lead the Huskers to victory.

Taylor hit his former junior college teammate Frantz Hardy on a 78-yard scoring strike in the first half and a 75-yard TD pass midway through the fourth quarter to go along with a 75-yard touchdown pass to Terrence Nunn in the game’s opening minute.

Hardy had a career-high 159 receiving yards, the fourth-highest total in school history just ahead of the 152 yards he had in 2004 against Maine. He became the first player in Nebraska history to post a pair of 150-yard receiving games in his career.

Despite the huge passing totals, it was a one-yard touchdown run by sophomore I-back Cody Glenn on the third play of overtime that proved to be the game-winner.

Glenn’s run was set up by a 21-yard connection from Taylor to Nate Swift on Nebraska’s second overtime play. The Jayhawks had forced overtime with a 26-yard touchdown pass with 46 seconds left in regulation.

Glenn’s touchdown, which improved Nebraska to 5-0 all-time in overtime games, set up a dramatic defensive stand by the Blackshirts, who surrendered a first down before closing the door on the Jayhawks.

Nebraska's not as salty as some of us thought, particularly on defense.

No longer should anyone believe the Huskers will do a fancy two-step dance past the supposedly watered-down competition in the Big 12 North Division.

What sticks out here was that Nebraska was given every opportunity early to deliver the knockout punch and failed to do so.

If the Huskers hope to translate their resurgence into a division title for the first time since 1999, consistency is the name of the game.

There is a glaring weak spot in our zone coverage, in between Grixby and Shanle, that teams can expose if we continue to give them time.

Credit the players and coaches for not caving in Saturday when things went bad for the Huskers.