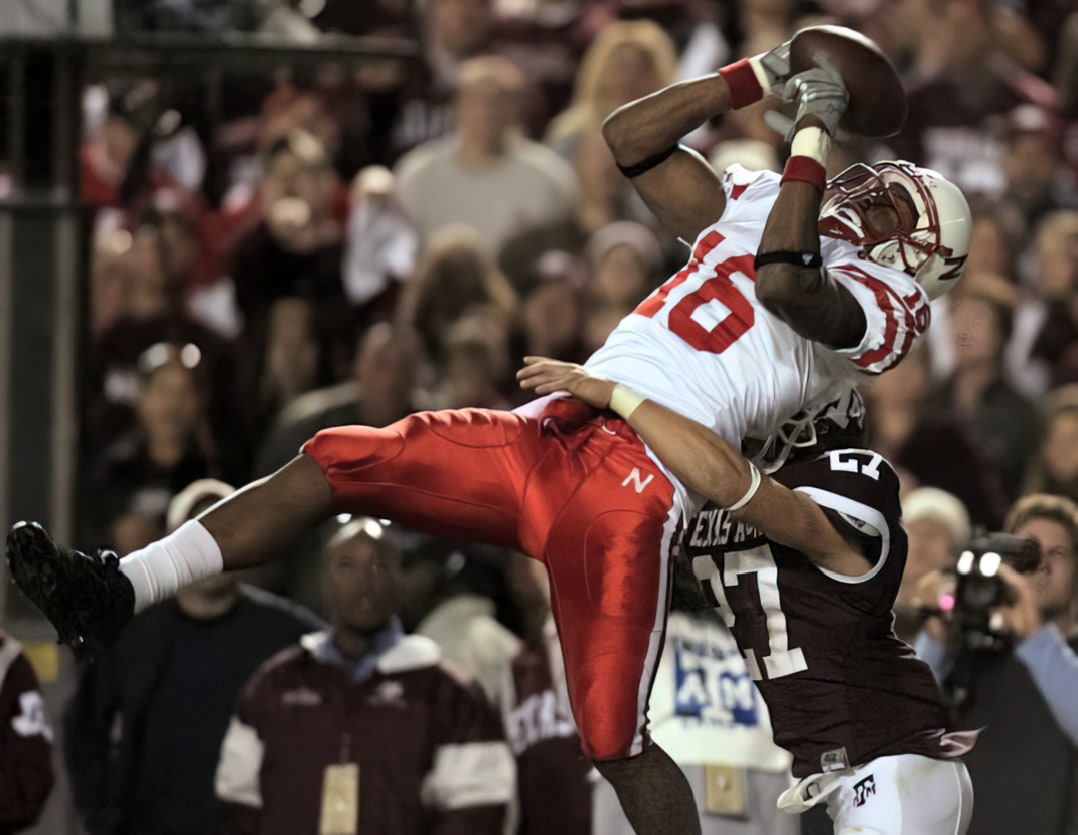 Zac Taylor hit Maurice Purify with a nine-yard touchdown pass with 21 seconds left to give Nebraska the Big 12 North Division title with a 28-27 victory over No. 24 Texas A&M at Kyle Field.

Taylor capped a record-breaking day with his pass to Purify to put the exclamation point on an 11-play, 75-yard drive in just 1:36 that stopped an impressive second-half comeback by the Aggies.

Taylor guided the Huskers to a 21-7 lead early in the second quarter and a 21-13 lead at the end of three quarters, but a pair of Texas A&M fourth-quarter touchdowns gave the Aggies a 27-21 edge with 7:28 left.

The Aggie defense came up with what appeared to be the game’s biggest play on Mark Dodge’s interception and 16-yard return. Texas A&M had a chance to end it just minutes later, but Nebraska’s Barry Turner blocked Layne Neumann’s 42-yard field goal attempt that would have given the Aggies a 30-21 lead with under two minutes remaining.

Taylor and the Huskers capitalized in a big way with their 11-play scoring drive. Adam Carriker snuffed the Aggies’ final chance with a sack of quarterback Stephen McGee at the A&M 39.

I don't know if this is a signature victory for Bill, but it certainly is for Zac. That was a drive we will be talking about for years.

This was one suitable for framing. This one will find its way onto the walls of every shag-carpeted basement from Auburn to Alliance.

The moment you think they’re about to experience a colossal collapse ... they come out of their coma and inject new life into their season. Perhaps into their program.

A season-changer. Who knows? Maybe even a program changer? Time will tell.

What a fun day it was for anyone who wears Husker red, and that especially included Taylor when he made all the right decisions in helping NU punch its ticket to Kansas City.

Having to pull games out at the end, time after time, is catching up to an A&M team that can spread blame to both sides of the ball for its slow starts.

Are the Aggies a team cursed by the football gods? Why can't they make the play with the game on the line?

Franchione's biggest shortcoming is Big Game-itis. It is an affliction that has staggered a number of coaches.

With every down, it seemed Zac Taylor grew more confident, even after he had several passes dropped