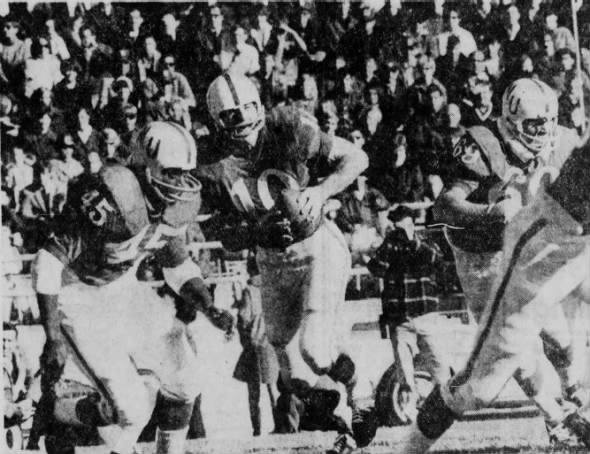 Frank Patrick, who threw for 290 yards against the Sooners, drops back to pass while Dick Davis (45) and Mel Brichacek (69) provide protection. The Lincoln Star Newspapers.com 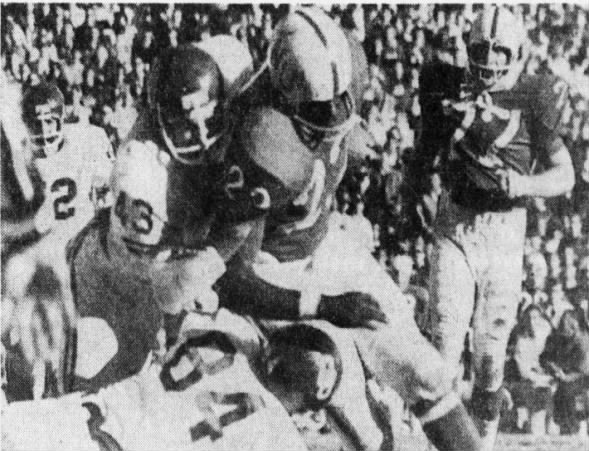 With a crowd of over 59,000 and a national ABC-TV audience of millions looking on, dethroned Nebraska tried valiantly to derail the title-bound Oklahoma Sooners. But the Sooners finally fought down the battling Huskers and pulled out a 21-14 victory in a tremendous Big 8 contest.

Oklahoma jumped out to a 10-0 lead early in the game and it looked for a while like a rout was in the making. But Nebraska regrouped and over­shadowed the Sooners in posting a 14-13 halftime lead that held up until the final quarter. The Sooners won the game when Eddie Hinton skirted left end and sprinted 23 yards to score the clincher with 14:12 left in the game.

Oklahoma got a 3-0 lead following a Joe Orduna fumble on the opening kickoff as Mike Vachon kicked a 20-yard field goal before the popcorn venders got to work in the stands.

After an exchange of punts, Ron Shotts made it 10-0 by capping a 47-yard drive with a one-yard plunge late in the first quarter. It got worse for the Huskers when Oklahoma’s Granville Liggins recovered a Frank Patrick fumble at the NU 31, and the Sooners got three more points on a 43-yard Vachon field goal.

Nebraska responded with gusto, marching 75 yards in nine plays after the kickoff, with Frank Patrick passing nine yards to Ben Gregory for the TD.

After blunting the Sooners at the Husker 20 late in the half, the Huskers again marched 80 yards to score with only 48 seconds left. Bill Bomberger’s second kick put NU ahead, 14-13, and the Huskers almost broke the game open when the Sooners fumbled the following kickoff.

Patrick pitched a 15-yard strike to Dennis Morrison and then hit Dennis Richnafsky in the end zone with a TD pass, but what could have been a 21-13 lead dissolved because Nebraska was guilty of illegal motion.

Bomberger’s 26-yard field goal try before the gun didn’t make it, and the game became a defensive struggle after intermission. Late in the third quarter, a short Nebraska punt set up the Sooners on NU’s 33. Oklahoma soon faced third-and-10 but converted on a pass from quarterback Bob Warmack to end Steve Zabel. On the next play, Warmack faked to tailback Ron Shotts and pitched left to wingback Hinton, who sprinted 23 yards into the north end zone for the winning score.