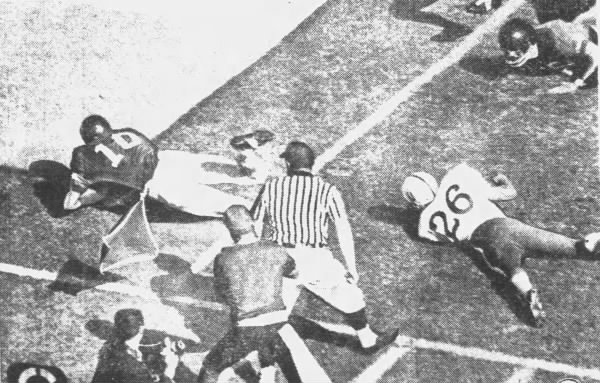 Bobby Douglass gets past Nebraska’s Jim Hawkins for the game’s only touchdown. The Kansas City Star Newspapers.com

Nebraska found it couldn’t escape two straight ambushes in the Sunflower State as the Kansas Jayhawks shook off earlier doormat appearances and struck down the Cornhuskers, 10-0.

It was the first time a Bob Devaney team had been shut out and snapped a Husker scoring string that went back to the ninth game of 1961.

Bobby Douglass, running and passing, skippered the Jayhawks to a second-quarter TD that proved to be enough to derail the Scarlets. He carried over from the four with 1:14 left in the half to cap a 62-yard drive.

Nebraska came within one yard of getting back in the game before the half ended. After getting a first down at the KU 45, Frank Patrick tossed a 42-yard pass to Tom Penney, who made a diving catch at the KU three. Two tries in the final eight seconds were hurled back by the Jayhawks.

Neither team threatened in the third quarter. Kansas cemented its victory in the final period after a pass interception and 28-yard return to the NU 32. Bill Bell kicked a 30-yard field goal with 36 seconds left, and Kansas had turned in a fine performance to start the Huskers toppling off the Big 8 throne for the first time in five years.

H’MAX NOTES: The upset ended a 10-game winless streak for Kansas, whose last victory had come Oct. 1, 1966, against Minnesota. … Both teams were held below 200 total yards and under 2 yards per rushing attempt. 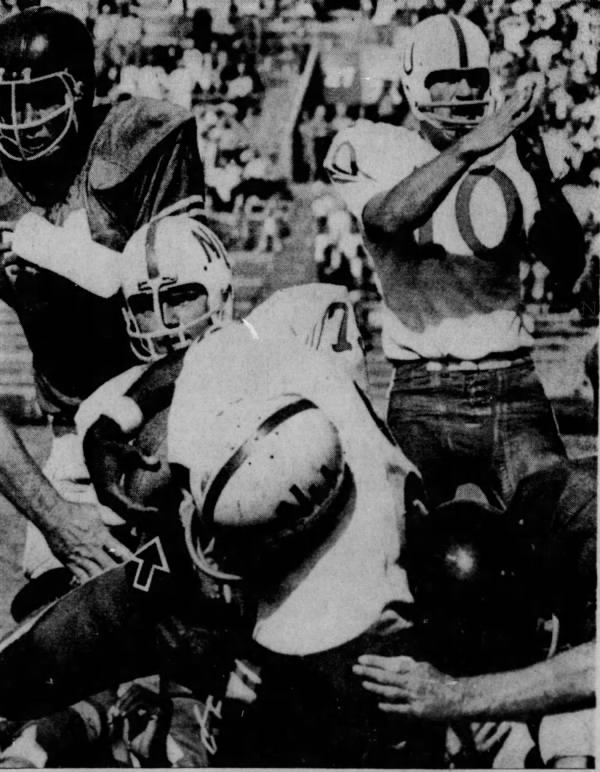 Frank Patrick calls for a time out as Ben Gregory is stopped at the KU three during the Huskers’ futile attempt to score before halftime. The Des Moines Register Newspapers.com