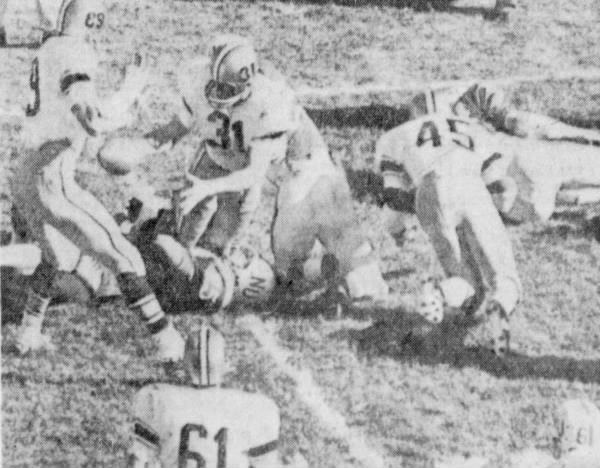 After returning an interception 27 yards, Dick Anderson laterals to Mike Veeder, who ran the remaining 45 yards for a Colorado touchdown less than a minute before halftime. Rapid City Journal Newspapers.com

Colorado and Nebraska had been sailing a collision course for a year after NU’s squeaker at Boulder in 1966. The crash came before a record crowd of 65,842 fans who stood and cheered the Huskers as they left the field, defeated 21-16 by a fine, opportunistic Buffalo team that would go on to win the Bluebonnet Bowl.

Two pass interceptions that went for TDs killed the inspired Cornhuskers, who thumped the Buffs in every department but the key one called scoring.

The fans hardly got seated before Colorado fumbled and Nebraska quickly drove 43 yards to score, Frank Patrick hitting Ben Gregory with a 17-yard TD toss with 8:23 left in the first quarter.

Colorado got a key break early in the second quarter when Nebraska elected to go for a fourth-and-inches situation at the Husker 29. The officials ruled Patrick failed to make the necessary yardage, and Colorado promptly punched in to score.

With only 49 seconds left in the half, the Buffs broke the deadlock in sensational fashion. All America Dick Anderson picked off a Patrick pass, apparently was hemmed in near the Husker bench and then lateraled to Mike Veeder, who skipped the rest of the way for a 72-yard score and a 14-7 halftime lead.

Nebraska took the second half-kickoff and went 80 yards to score in eight plays as Joe Orduna broke loose for a 27-yard TD. But Bill Bomberger’s kick was blocked and NU still trailed.

With 3:09 left in the third, Colorado again capitalized on an interception. Jeff Raymond grabbed a Patrick toss and tore 67 yards unhampered to score.

Back battled the Huskers in the fourth period, and a 39-yard Patrick-to-Orduna pitch set up a 33-yard field goal by Bill Bomberger. But the hay was in the barn and the Huskers, who had 402-182 yardage bulge, couldn’t dent the Buffs during the rest of the game. Fittingly, the final play of the game was a pass interception by Colorado, as if to spotlight the theme of the day.