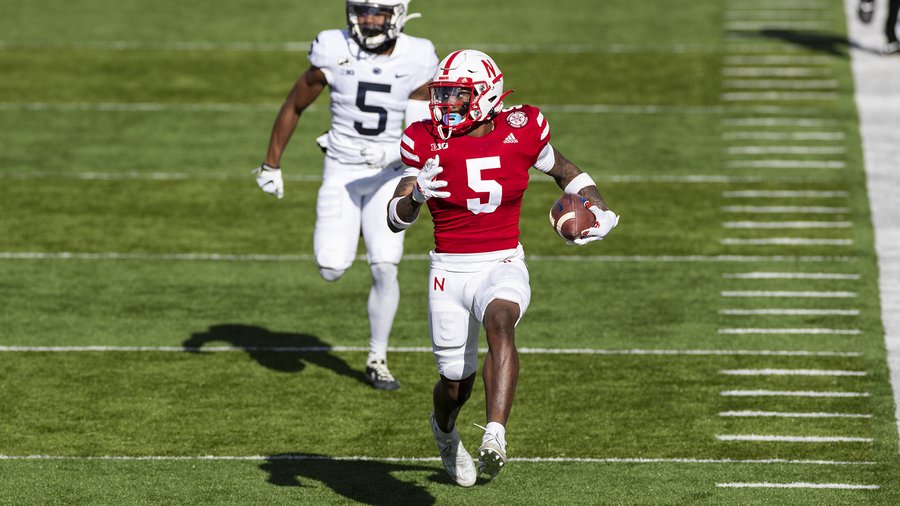 Huskers.com
Cam Taylor-Britt returns an interception against Penn State.
By Tad Stryker on 11/14/2020

Can you imagine the joyous outburst when an inexperienced team, hungry for clues on how to win in the Big Ten, finally experiences success?

We’ll all have to imagine because almost nobody saw the response. After all, offensive coordinator Matt Lubick and about half of the disconcerted Nebraska coaching staff were ensconced in their designated room high above the West Stadium. After all they endured on a pressure-filled Saturday afternoon in Memorial Stadium, there’s little doubt that room in the sparsely-populated press box erupted with shouts of happiness when Penn State’s final fluttering fourth-down pass fell harmlessly to the turf.

Down on the field, where the Nebraska football team occupied the west sideline for the first time since Bill Jennings was coach, senior defensive end Ben Stille walked calmly off the field after pressuring Penn State’s backup quarterback, Will Levis, into that final incompletion, as the freshman- and sophomore-dominated Nebraska football team celebrated their first home win in more than 13 months.

Nebraska’s shaky 30-23 win over Penn State improved the Cornhuskers to 1-2 and kept the Nittany Lions winless at 0-4. At the very least, it stops the Husker program’s bleeding, and may at least slow the pace of criticism being hurled at coach Scott Frost.

Frost and his staff are stewards of a young team with a lot of explosive potential, but at times, it looks like nobody is quite sure about how to use it. How much did they learn in this win?

This is a program in need of wisdom and confidence. Young players need it from their coaches, but sometimes it feels like the coaches are trying to conjure it up out of a near-empty tank. Frost and his staff came to Nebraska with all the momentum in the world, after winning the American Athletic Conference title at UCF in 2017, but they’ve been outcoached in the second half of the majority of their conference games since 2018, and their on-the-job progress has been slower than expected.

With redshirt freshman Luke McCaffrey running the offense and 23-game starter Adrian Martinez sitting the bench the entire game, this win may not have been a turning point, but it looked a lot like a starting point, considering that true freshman wide receiver Zavier Betts of Bellevue West made one of the game’s biggest plays on his 45-yard jet sweep touchdown reception. That gave the Huskers a 17-3 lead early in the second quarter.

On the next series, senior safety Deontai Williams made an even bigger one. Sneaking up to overload the left edge of the defensive line, Williams strip-sacked PSU starting quarterback Sean Clifford, then bounced up from the turf, scooped up the loose ball and ran it 26 yards for a touchdown. That play — probably the first one in the Frost era worthy of consideration for the 250 most significant Husker moments of all time, boosted Nebraska’s lead to 24-3 and turned out to be the difference for Nebraska, whose offense went touchdown-field goal-touchdown on its first three drives, then never found the end zone again.

Maybe Eric Chinander discovered a few clues this week. Despite giving up 500 yards in 91 snaps, the Husker defense won this game; the offense simply avoided losing it. So Chinander critics, you can take the week off. The defensive line bailed out their counterparts in the more experienced offensive line, which continues to underperform. Stille’s game-ending quarterback pressure was one of the highlights of an emerging pass rush, as was sophomore linebacker Luke Reimer’s sack on the previous play.

This was not a shock-the-nation moment. I’m not sure you can even call it an impressive win, given the misfortune that Penn State has absorbed this year (including the heartbreaking cardiomyopathy-related retirement of Journey Brown, one of the nation’s most promising running backs). On the other hand, let’s not forget that Penn State was rated in the preseason Top 10 and less than a month ago, ESPN had promoted the Nittany Lion program to the threshold of “elite” status.

Nebraska built a 21-point halftime lead and held off the late-charging Lions, thanks to Travis Fisher’s veteran defensive backfield, who forced 11 incompletions on Penn State’s final two drives and stopped the Lions in the red zone both times, it was a hammer-the-stake-into-the-ground, the retreat-ends-here moment. It was a much-needed end to a discouraging slide for the Big Red.

Dicaprio Bootle, Marquel Dismuke and Cam Taylor-Britt all had big moments — especially Taylor-Britt, who intercepted Clifford’s first-quarter pass and ran it back 55 yards to set up a field goal to give NU a 10-0 lead. He also returned a punt 25 yards and brought a missed field goal back to the Husker 34-yard line. He was the reason Nebraska won the “hidden yardage” battle for the first time in ages.

It was a turnaround from the previous week, when the Husker offense piled up yardage but only 13 points. After their first three drives, the Husker offense had a few big moments, most of them centering around McCaffrey, but still has not scored a second-half touchdown in three games.

Frost and his offensive staff are groping for answers about what the Husker attack should look like, and who they should count on at skill positions. Unless Greg Austin can figure how to refine a run game that leans on senior Dedrick Mills, the answer is, “youngsters,” which means Husker Nation is in for an erratic ride that could lead to better things in 2021. Throughout much of the second half, the offense looked unorganized, often with players running on or off the field at the last minute. The erratic game management burned a pair of timeouts that could have proven costly had the Huskers needed to make a last-ditch drive to avoid overtime.

Overall, it was an adequate first start for the speedy McCaffrey, whose biggest play may have been the quarterback draw which he bounced outside for 12 yards on third-and-10 on the game’s opening drive. He threw the touchdown pass to Betts, and should have had another if Kade Warner had not dropped an easy catch in the end zone on the Huskers’ second drive, costing his team four points that loomed large late in the fourth quarter.

McCaffrey ran for 67 yards and a touchdown. He completed 13 of 21 passes for 153 yards and another TD, plus one interception that can be attributed to simultaneous pass blocking whiffs by his veteran left tackle and his rookie right tackle.

In some ways, the offensive upheaval is understandable. Frost, Lubick and the offensive staff were counting on a major contribution from highly-touted junior college transfer Omar Manning at wide receiver, but Manning has been invisible so far. He never set foot on the field against the Nittany Lions. So at this point, you’ve got to shift your thinking, and figure that anything Manning contributes this year will be a bonus. That’s a major setback that’s having ripple effects.

Then again, Frost has had to shift his thinking a lot since he came to Nebraska, so he’s getting used to scrapping plans and finding new ones. His offense has not produced 30 points in a home conference game in almost two years. It last came against Illinois, who returns to Memorial Stadium next Saturday.

Can Nebraska string two wins together? Is it capable of four quarters of solid football? Frost has emphasized mistake-free football the last two weeks, and it paid off Saturday when Huskers limited themselves to five penalties for 39 yards and went plus-one in turnovers against Penn State. So that’s a start, although maybe not worth shouting for joy just yet.