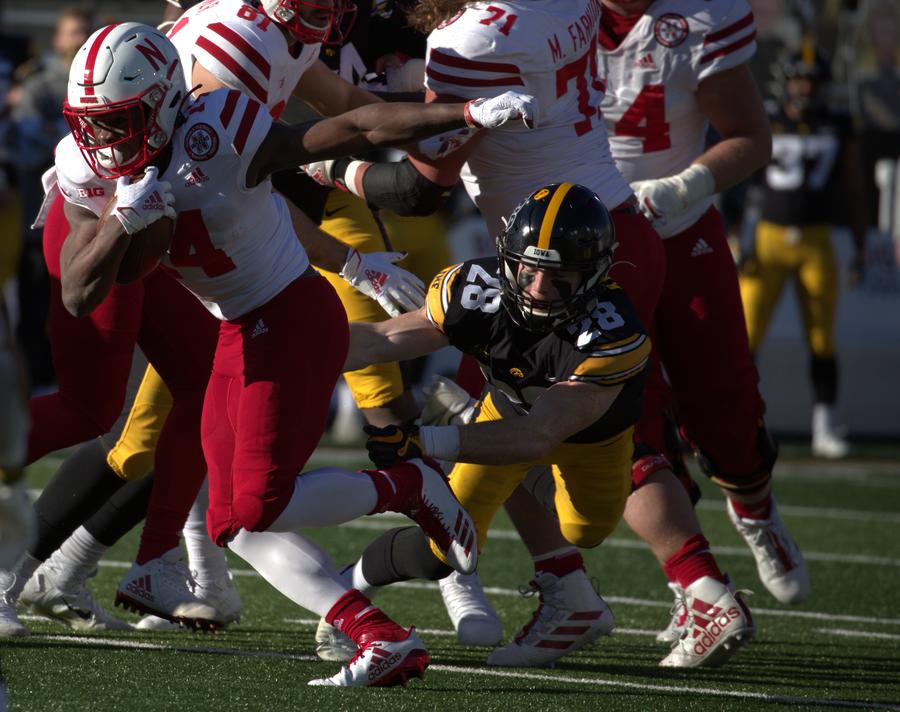 Huskers.com
Rahmir Johnson gets some hard-earned yardage against Iowa.
By Tad Stryker on 11/27/2020

How long can Scott Frost keep spinning close losses as evidence that his team is almost ready to break through?

For the third consecutive season, the Cornhuskers took Iowa to the wire before losing. Frost, who is 4-11 in one-score games at Nebraska, would be at least a .500 coach in Lincoln if his teams could close the deal in tight games. Instead, he is 10-19 and in a never-ending quest for answers.

One possible answer: consider playing someone who doesn’t ruin two or three drives per game with his bad center snaps. You think maybe that could come back to bite you in a one-score game?

Frost has gotten some bad breaks since returning to his alma mater, but some of his biggest problems are caused by the amazing tolerance he and his staff have for players who can’t get the job done. You sure can’t say they’re giving up on kids too quickly.

Is it laudable patience? Is it a lack of accountability? Is he too emotionally attached to his players? Or is it a simple failure to develop enough depth?

Although the offense continues to under-perform, the defense has improved in fits and starts. On the whole, Friday’s effort at Iowa City was an encouraging one for the Blackshirts, who held the Hawkeyes to 322 total yards on 72 plays (4.3 yards per snap) and kept the Big Red in the game all day long despite offensive inconsistency and special teams meltdowns that put it in bad field position much of the time.

Defensive coordinator Erik Chinander and his position coaches have gotten some good production out of their youngsters, starting with Ty Robinson and Casey Rogers up front, Luke Reimer and Nick Henrich at linebacker and Myles Farmer at defensive back.

On offense and special teams, Frost has become too tolerant of players who are liabilities in games that are within grasp. Punter William Przystup is a prime example. Przystup had a miserable game, averaging 37 yards per punt and under 30 net yards per punt. Even though he was ordered to kick the ball out of bounds, he hit a weak wind-aided 42-yarder straight down the field to Iowa’s return man Charlie Jones, who set up the Hawkeyes for their first touchdown with a 31-yard return. He season net punting average is under 35 yards per kick and he has trouble with directional kicking.

The Huskers have three other punters on the roster (none of whom have had a single opportunity), including the Australian Daniel Cerni. Cerni is an example of highly-touted players who come to Lincoln and disappear with mysterious ailments. Cerni, who comes from the Prokick Australia program, joins last season’s top junior college prospect Omar Manning as much-anticipated additions to the roster who have never sniffed the field this fall.

Although Przystup is a fair enough example of “What does a guy have to do to get benched these days?” the most obvious case in point is senior offensive lineman Matt Farniok.

Farniok is Exhibit A of lack of senior leadership on an offense that has no closing power, is unreliable in the red zone, and gets weaker as the game goes on. The offensive line, once expected to be the strength of this team, continues to disappoint and Farniok, who was abused by Iowa junior defensive tackle Daviyon Nixon much of the game, is a major reason. Some of this season’s inability to get production from running backs is injury-related, but much can be laid at the feet of the o-line.

I don’t see the players every day like Frost, all I can do is watch on game days, so I’m in no position to challenge his assertion that Farniok is the “heart and soul of our line,” but if true, that’s all I need to know about why the offensive line has underachieved.

I’ve never found much reason to be impressed, and things are not improving. I don’t understand why Frost allows offensive line coach Greg Austin to keep running Farniok out there series after series. You already know exactly what you’ll get from him.

I feel a lot better about rolling with the ups and downs the Huskers get from redshirt freshman Bryce Benhart than I do about a third consecutive season of Farniok’s mid-level power, slowness off the mark and clumsy footwork, which was rightly judged inadequate to play tackle. He is less of a liability at guard, but maybe it’s time to give more snaps to a younger player who can help you out next fall.

With Nebraska at 1-4, it’s time to make preparation for 2021 the primary goal. Frost should consider swallowing his pride, admitting that Cam Jurgens is a liability snapping the ball, giving about two dozen snaps a game to Matt’s younger brother Will Farniok at center and rotating in sophomore Nouredin Nouili, who started at guard last season for Colorado State. Maybe Jurgens learns to play guard in spring ball, or maybe you move him somewhere else.

Frost seems so deeply invested in Jurgens as “the next Dave Rimington” that he probably will never move him, and the sophomore from Beatrice has enough athletic ability that maybe he’s worth all the hassle. That cannot be said for Matt Farniok, who should be much more effective than he is after 33 career starts.

Against Iowa on Black Friday, Farniok’s mediocrity showed up early and often.

• On the first series of the game, Farniok and redshirt freshman right tackle Brice Benhart were baffled by a simple twist stunt, allowing Nixon to slice between them untouched to sack Martinez and stuff the drive while somehow not blocking anyone else on the play.

• On the game’s second drive, Nixon beat Farniok easily to stuff freshman running back Marvin Scott for a 3-yard loss.

Farniok was fairly solid in the second quarter and the first drive of the third, but things went south rapidly after that.

• Iowa tied the game 20-20 in the third quarter, but after 5-yard reception by Wan’Dale Robinson on first down, Farniok whiffed again on Nixon, who shoestring tackled Martinez for a one-yard loss on an play that should have gone for first down. The drive stalled.

• On the subsequent Husker drive, the play after Benhart’s holding penalty nullified a 30-yard quarterback draw by Martinez, a pulling Farniok whiffed his block on an Iowa linebacker, who stuffed a promising screen pass to Robinson for a loss of two yards, turning a first-and-20 into a second-and-22. The drive stalled.

• On the do-or-die final drive, Martinez hit Robinson for an 18-yard gain to the Iowa 39, but on the next play, a stumbling Farniok was beaten by defensive end Chauncey Gholson, who strip-sacked Martinez for the game-clinching turnover.

There’s no doubt the senior from Sioux Falls, S.D., felt terrible after the game, probably worse than anyone else. And sadly, that’s what far too many Nebraska upperclassmen do best. That’s an indictment of the coaches who keep putting them on the field.

What the Huskers don’t do is play disciplined football. What they don’t have is effective upperclass leadership. What they don’t know is how to stand tall in tough situations and make big plays to win close games. That’s what juniors and seniors are supposed to do. Nebraska’s are not doing it nearly enough.

That’s partly because Frost’s first recruiting class has largely dissolved, and partly because the Huskers have not gotten much production from their junior college transfers. Besides the above-mentioned Manning, Keem Green, who was touted for his NFL-level talent and would have gone to an SEC school except for an online math class he took, is doing almost nothing in the defensive line. Will Honas has been steady but unspectacular at linebacker. Niko Cooper has made a couple of good special-teams plays, as has Nadab Joseph, who was touted as a cornerback. Eteva Mauga-Clements has not played a snap at linebacker thus far, and Jordon Riley has had precious few at defensive tackle.

Besides Deontai Williams, who transferred as a sophomore from Jones County CC, Honas and Pheldarius Payne are the only JC transfer success stories on the team at this point.

The best thing Frost could do is commit to a youth movement, giving wide receivers Zavier Betts and Alante Brown as many snaps as they can handle, and lining up the two healthiest freshman and sophomore running backs behind Dedrick Mills, who Frost said was “close” to playing against Iowa and hopefully will be in good form for the Purdue and Minnesota games.

Chinander appears to have a plan to develop young talent on the defensive side, where Nebraska held up better than I anticipated. Nobody was blown off the ball, linebackers overcame the loss of Collin Miller to maintain their running lanes and proper pursuit angles, and the Hawkeye running game was not effective until late, when the Huskers started leaking yards after contact. There were not enough takeaways, but that’s always a difficult proposition against Iowa.

The effort from Nebraska was laudable Friday, but since I’m skeptical of this team’s ability to bring top-shelf effort in two consecutive games (that’s a whole separate issue with this coaching staff), I think committing to a youth movement — especially in the offensive line — makes sense.