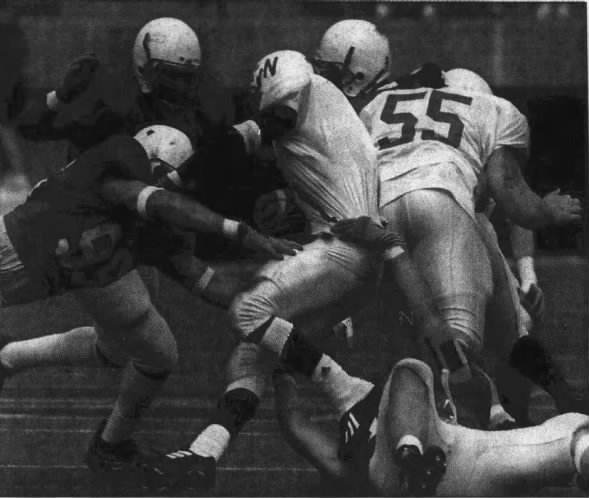 The Red team earned a 16-7 victory over the White team as Nebraska ended the spring football season with the annual Red-White game.

I-back Dahrran Diedrick led the Red squad as he carried the ball 18 times for 52 yards and scored the first points of the game on a six-yard run around left end with 6:55 left in the first quarter. Quarterback Jammal Lord also produced a strong effort for the Red, racking up 46 yards on 11 carries and completing 7-of-11 passes for 71 yards. Split end Wilson Thomas was Lord’s favorite target as he caught four passes for 47 yards.

Also providing a solid rushing effort, Thunder Collins led all rushers with 55 yards on 13 carries for the White, while Robin Miller added 49 yards on 11 carries. Miller tied the score at 7-7 with 11:07 remaining in the first half as he ran in over right tackle for an eight-yard score.

Quarterbacks Joe Chrisman and Brett Lindstrom were just 4-of-10 for 68 yards for the White squad, but they were hampered all day as the Red defense recorded 12 sacks. Benard Thomas collected four sacks for minus-25 yards while Manaia Brown had three and Justin Smith added a pair.

Placekicker Sandro DeAngelis had three field goals to round out the scoring for the Red. DeAngelis connected from 37 and 48 yards in the second quarter as the Red took a 13-7 lead at the half. After a scoreless third quarter, DeAngelis added another 37-yarder to cap the scoring.

Starting quarterback Eric Crouch sat out the game as he continued to recover from shoulder surgery.

With no No. 7 and the line injuries, it is hard to draw any conclusions. But the team I saw Saturday really lacks playmakers.

Now it's time to get back to that traditional Nebraska I-back. The personality, and success, of this team next season depends on it.