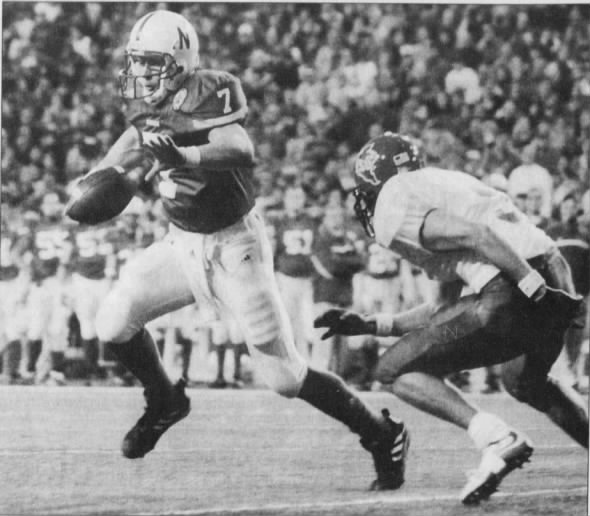 Eric Crouch gets past Iowa State’s Adam Runk for one of his four first-half touchdowns. · Des Moines Register · Newspapers.com

Just 1:56 into the contest, Nebraska cornerback Keyuo Craver intercepted a Seneca Wallace pass and returned it 57 yards for a touchdown.

After Nebraska forced a punt on the following possession, DeJuan Groce took the return 34 yards. Nebraska proceeded to march 49 yards in five plays, capped by Dahrran Diedrick’s two-yard touchdown run to give the Huskers a 14-0 advantage.

Groce collected Nebraska’s second interception and returned it nine yards to the ISU 23 to set up Crouch’s first score, a one-yard run that gave NU a 20-0 lead with 1:20 left in the first quarter.

The Huskers then marched 87 and 92 yards on their next two drives, capping both with Crouch TD runs to extend NU’s advantage to 34-0. Crouch finished off the 41-0 half with a one-yard TD run after Troy Hassebroek blocked an ISU punt deep in Cyclone territory.

Nebraska, which had 287 yards of offense in the first half, worked the clock after intermission, including an eight-minute, 83-yard drive in the fourth quarter. I-back Robin Miller capped the 16-play drive with a one-yard run for the final 34-point margin.

As a team, NU gained 359 yards on the ground. Diedrick topped the 100-yard mark for the third time this season, rushing for 107 yards on 15 carries.

Last week against Baylor, ISU’s Wallace completed 22 of 24 passes, including a Big 12 record 18 in a row. He struggled, however, in the first half against Nebraska, connecting on four of 14 passes for 61 yards. He finished with 214 passing yards, doing most of his damage in the third quarter as ISU tried to rally from the 41-point deficit.

The Cyclones dropped to 3-1 on the season and 1-1 in the league despite scoring a pair of second-half touchdowns. Wallace recorded ISU’s first score with a 17-yard scramble and then added 13-yard TD pass to Lance Young to trim NU’s lead to 41-14.

Nebraska placekicker Josh Brown’s missed extra point in the first quarter snapped his streak of 117 consecutive made PATs dating to 1999.

Seneca had never had corners bait him into throwing interceptions like our guys did.

The story remains the Huskers don’t put anyone away, don’t finish the job.

Crouch set a pair of records Saturday, but doesn’t that happen every week?