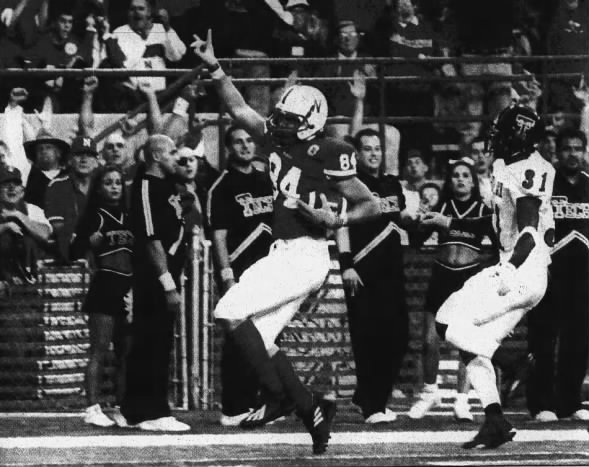 Nebraska (8-0, 4-0 Big 12) then took the ball 80 yards on eight plays, including seven straight rushes, to tie it at 7-7 three minutes later. Crouch capped the drive with a 27-yard scoring toss to tight end John Bowling.

Tech’s Jason Wesley fumbled the ensuing kickoff, and the Huskers’ Tim Demerath recovered the ball at the Tech 25. Fullback Judd Davies rumbled in on the next play, and Nebraska had a 14-7 lead.

Crouch then started to hit through the air. His 19-yard TD pass to split end Wilson Thomas gave Nebraska 21-10 advantage late in the first quarter, and he followed up with a 35-yard TD toss to Thomas at the beginning of the second quarter for a 28-13 lead.

The Blackshirts, who came in with a top-5 national ranking in total defense, allowed Texas Tech 261 total offense yards in the first half as the teams combined for over 500 yards of offense in the first two periods. By game’s end, the Red Raiders had thrown 64 passes.

I hope and think that we were flat Saturday night, because we got zero pressure on the QB.

They say the season starts next week with the Sooners. Well, it almost ended Saturday night at Memorial Stadium.

The thing that should turn every Husker fan’s stomach is the incredible number of injuries sustained by Nebraska.

Texas Tech never came close to stopping the option, which opened things up for a few big pass plays in the first half.