Eric Crouch sprints down the sideline for his fourth-quarter touchdown as teammates cheer him on. | VIDEO · The Oklahoman · Newspapers.com 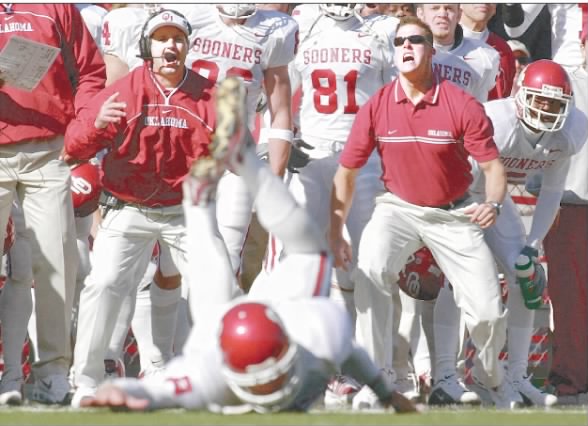 OU coach Bob Stoops, left, reacts as Nate Hybl can’t make the catch late in the first half on a trick play similar to what worked later for Nebraska. The Oklahoman · Newspapers.com

Nebraska quarterback Eric Crouch didn’t need to run or throw for a touchdown, but his TD reception with just over six minutes remaining was the lift the Huskers needed, helping No. 3/3 Nebraska to a 20-10 victory over conference rival and second-ranked Oklahoma.

Playing in front of a crowd of 78,031, the No. 1 and 2 teams in the first BCS rankings didn’t disappoint, as they featured rugged defense, some smash-mouth offense and a little trickery.

It was Crouch who provided the biggest highlight for the Big Red faithful as he caught a 63-yard touchdown pass from true freshman Mike Stuntz to put the game out of reach with six minutes left. With the Huskers hanging on to a 13-10 lead and the ball at the Nebraska 37, Crouch ran down the line to his left and pitched to Thunder Collins, who looked to be running a reverse. Collins then tossed the ball to Stuntz, who hit Crouch in stride at the Oklahoma 40. Crouch went into the end zone untouched for the final 20-10 margin.

OU had at least one more chance to get back in the game, but the Blackshirts came up big. NU allowed the Sooners just 10 yards on 11 plays in their final two drives. Junior nose tackle Jon Clanton sealed OU’s fate with a 12-yard sack of OU quarterback Nate Hybl on third down, before Hybl’s last-chance throw to Curtis Fagan fell incomplete. Joining Clanton with big defensive plays all day was senior linebacker Jamie Burrow, who recorded 16 tackles.

Bohl was creative — the 3-3-5 alignment was confusing for them.

The surprise of the day was that Solich would actually pull a surprise in a crucial moment, a defining moment, when it could blow up in his face.

Defensive coordinator Craig Bohl deserves a lot of the credit. ... His blitz calls were right on the money almost every time.

Suddenly, in a flash of superlative scarlet, the world discovered why they call NU’s head man ‘Fearless’ Frankie.

It wasn’t just that the ‘Sooner magic’ ran out. The Huskers came to play for four quarters.

The youth on the Oklahoma offensive line was taken advantage of by Nebraska. ... This offense, even when Josh Heupel was running it, is susceptible to pressure.