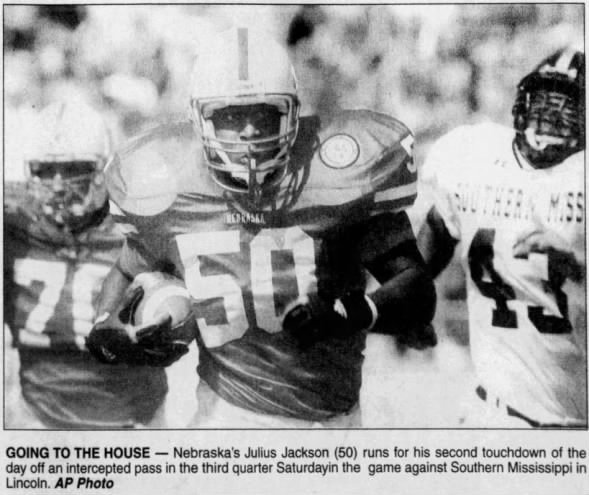 Senior linebacker Julius Jackson scored a pair of touchdowns to lead Nebraska to a 20-13 victory over Southern Miss.

Jackson led a Husker defense that forced six turnovers and recorded five sacks as Nebraska improved to 3-0 despite gaining less than 200 yards in total offense.

As Nebraska trailed by 13-12 in the third quarter, Southern Miss quarterback Jeff Kelly’s pass was deflected by a blitzing Keyuo Craver, who tipped the ball into the air where Jackson caught it at the USM 28 and raced untouched into the end zone to give NU an 18-13 lead. Dan Alexander converted on the two-point conversion run to give the Huskers a 20-13 lead.

The Golden Eagles had two opportunities to send the game into overtime in the final six minutes, but Craver ended both drives with a pair of fourth-quarter interceptions, including one on the 1-yard line with 1:17 remaining.

Jackson’s first score, a 16-yard fumble recovery off Kyle Vanden Bosch’s sack of Kelly, gave the Huskers a 6-0 lead seven minutes into the game. Vanden Bosch, who finished with a career-high nine tackles and a pair of sacks, jarred the ball loose from Kelly, and Jackson picked it up and scored his first career touchdown.

After making a bold major personnel move involving the squad's two most explosive players, it definitely wasn't the kind of performance Solich was hoping for.

The offensive line is average, there are no game-breaking I-backs in the pipeline and the house that Osborne built it is on shaky ground.