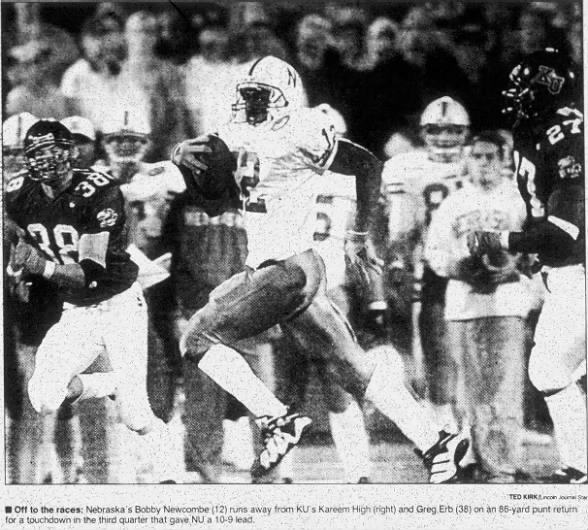 Former quarterback Bobby Newcombe came through with 200 all-purpose yards and two pivotal touchdowns as Nebraska scored all its points in the second half and defeated Kansas for the 31st consecutive time, 24-17.

The Jayhawks were blanked in their last two meetings with the Huskers but took a 2-0 lead in the first quarter when freshman Matt Jordan blocked a punt in the end zone and Nebraska fell on it.

Kansas made it 9-0 in the second quarter when quarterback Dylen Smith hooked up with tight end David Hurst for a 22-yard TD. The KU scoring drive covered 79 yards.

Nebraska’s first possession of the second half ended on a fumble deep in KU territory. On the Huskers’ next drive, Nebraska finally got on the scoreboard with a 31-yard Josh Brown field goal. With 2:14 to go in the period, the Huskers got their first lead at 10-9 when Newcombe returned a punt 86 yards for a touchdown.

After a 21-yard punt return by Joe Walker set up Nebraska near midfield, the Huskers mounted a 53-yard drive, capped by quarterback Eric Crouch’s eight-yard touchdown run early in the fourth quarter to boost Nebraska’s advantage to 17-9. But on the first play after the kickoff, KU’s Smith threw a 77-yard touchdown pass to Mike Chandler up the right sideline. Smith then found Chandler for the two-point conversion to tie the game, 17-17, with 11:44 remaining.

Nebraska missed a 43-yard field goal on its next possession. After a defensive stop, the Huskers drove from their 26 to midfield, where they converted a fourth-and-1. On the next play, Newcombe delivered the winning score when he took a short pass from Crouch and turned it into a 49-yard touchdown with 3:24 left.

Football is a game of emotion, and on Saturday we had none and played like it.

K-State's march toward perfection began in earnest Saturday. The Cornhuskers are marching toward a Kansas State thumping and a second-tier bowl bid.

Newcombe pulled the Huskers out of a performance that was as flat and lackluster as they've shown all season. So much for the wake-up call at Texas.

In the big picture, winning the Big 12 crown isn't such a bad goal to have.

At least the Jayhawks, 32-point underdogs, made a statement.