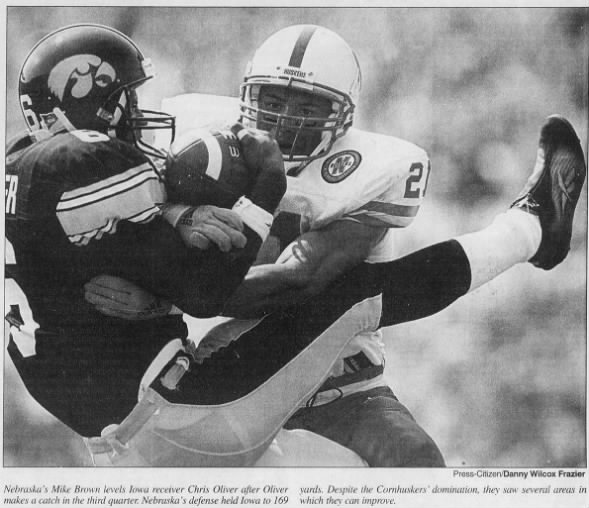 Bobby Newcombe atoned for three first-half turnovers by running for two touchdowns and passing for one as No. 5 Nebraska opened the season with a 42-7 victory over Iowa.

Leading just 7-0 after a mistake-laden first half, Nebraska gradually asserted control behind Newcombe and No. 2 quarterback Eric Crouch to spoil the debut of Iowa coach Kirk Ferentz.

Crouch, who lost a highly publicized battle with Newcombe for the starting job, ran for three touchdowns.

Newcombe threw a 47-yard touchdown pass to Sean Applegate to get the Cornhuskers going early in the third quarter, then had scoring runs of 1 and 5 yards to stretch the lead to 28-0.

Crouch sprinted 28 yards for Nebraska’s first touchdown and scored on fourth-quarter runs of 6 and 21 yards as Iowa wore down in the heat. It was 85 degrees at kickoff and 92 by the fourth quarter.

Crouch was clearly the better QB on Saturday. But next week it could be Bobby.

Sure Crouch may have been better than Newcombe this day, but Solich's decision not to deviate from the plan spoke volumes.

Hawkeye fans should not be afraid to take solace in Iowa's early defensive effort.