There were four lead changes in the fourth quarter of the nail-biter, the last coming on Steve Taylor’s 11-yard touchdown pass to Todd Millikan with 1:26 left in the game.

The winning touchdown was set up when Nebraska’s Broderick Thomas forced a Gamecock fumble on a swing pass from quarterback Todd Ellis to wingback Raynard Brown. The Huskers’ Brian Davis recovered the ball near the sideline at the USC 26 with two minutes to go.

After Nebraska took the lead, a 41-yard kickoff returned coupled with a 15-yard facemask penalty put the Gamecocks in business at the Nebraska 39 with 1:18 remaining, setting the stage for Siebler’s deciding interception.

The Gamecocks’ Ellis, a redshirt freshman, finished with 286 yards passing and set a school record with 26 completions.

“Their offense was very, very good,” Nebraska coach Tom Osborne said afterward. “We just couldn’t seem to stop that dump pass they kept throwing. We’ve got to go back to the drawing board a little.” 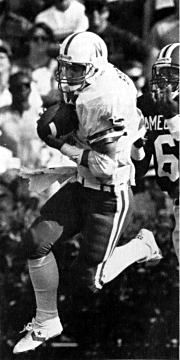