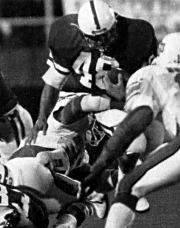 In another Memorial Stadium night game, Nebraska ran its record to 5-0 as the Huskers opened Big Eight play with a 30-10 win over Oklahoma State.

The Husker defense gave up only a field goal as OSU’s touchdown came on a second-quarter pass interception. The Cowboys pulled within 14-10 later in the quarter before Nebraska pulled away.

Star OSU running back Thurman Thomas was limited to 33 yards on 22 carries.

It was the Huskers’ 13th straight win over Oklahoma State as they remained unbeaten against the Cowboys since 1961.