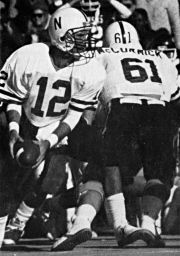 Huskers give Jayhawks worst beating ever

Nebraska scored two touchdowns before Kansas took a center snap, and the Huskers rolled to a 70-0 romp in a game that marked the worst defeat in Jayhawk football history and Nebraska’s biggest shutout win since World War I.

Junior Clete Blakeman threw three touchdown passes and ran for another while subbing for banged-up Steve Taylor at quarterback.

I-back Keith Jones came back from hand surgery to rush for a game-high 117 yards, leading a parade of seven Husker runners over 40 yards.

Nebraska opened the game with a 14-play touchdown drive. After Kansas fumbled away the ensuing kickoff, Jones scored on the next play and the rout was on.

The NU defense had a 10-year best of minus-21 rushing yards.