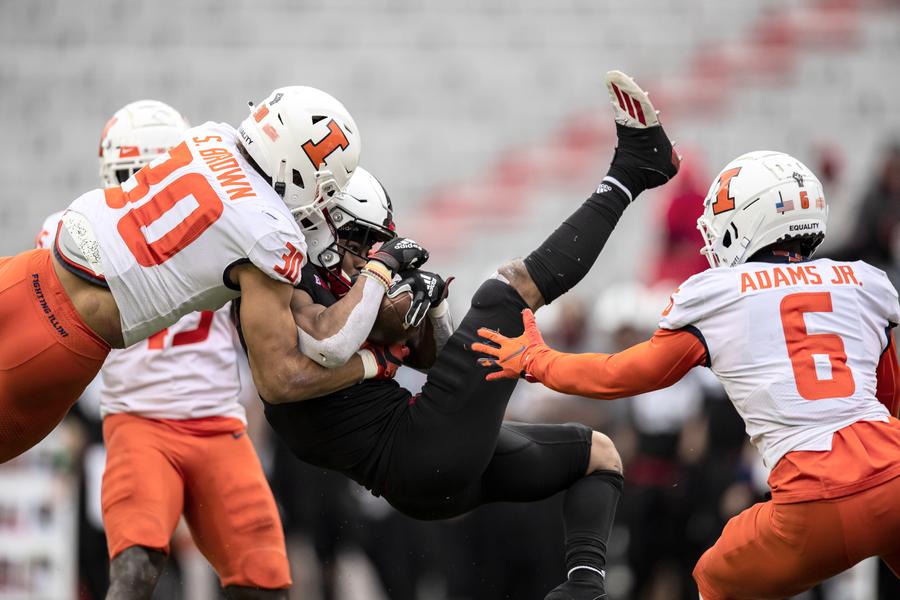 Huskers.com
Wan'Dale Robinson makes a second-half catch against Illinois.
By Tad Stryker on 11/21/2020

The most valuable real estate in Nebraska, a place where the Cornhuskers once won 47 consecutive football games, looked a lot like a sandlot on a dreary day in November.

Sandlot football. That’s what Scott Frost’s offense looked like Saturday as it scuffled between middle school-style mistakes, flashes of talent, and utter confusion. They’re frozen with indecision, missing key blocks, hesitant to throw passes on time, constantly looking over their shoulder, expecting something bad to happen. They lose one-on-one battles at the line of scrimmage well over half the time. This looked nothing like the team that built halftime leads over Northwestern and Penn State.

Due to COVID-19 restrictions, the battle for the Big Ten West basement was witnessed only by close family members, which prevented a mass exodus at halftime that would have brought back bad memories of the 2007 Oklahoma State or the 2017 Ohio State games.

The 41-23 Illinois victory was the Fighting Illini’s first in Lincoln since 1924. Their one-sided win over a more talented Nebraska team favored by two touchdowns is a major blow to the Huskers, who lost every bit of momentum they gained in a win over Penn State last week, and must travel to face an Iowa team that is gaining momentum and should be heavily favored.

Hopefully, it’s also a major wake-up call for Frost and his staff, because vultures wearing red Husker gear will be circling Memorial Stadium this week, looking for an opportunity to tear hunks of flesh out of their hides. Heck, they were already dive-bombing at halftime. My email started filling with calls for the firing of Erik Chinander, Mario Verduzco and Matt Lubick almost two hours before the game ended. I’m surprised nobody’s singling out offensive line coach/run game coordinator Greg Austin, because he’s the underperforming coach of the year at this point.

Since the rules of football don’t allow position coaches to come onto the field after every play so they can explain to their charges what went wrong and how to fix it, redshirt freshman quarterback Luke McCaffrey was left to ad-lib his way much of the time. McCaffrey — who probably had better blocking support in backyard games against his brothers — acted like he was constantly unprepared for what he saw. He was reduced to mentally drawing up plays in the dirt, and very few of them worked.

That started with the game’s first snap, on what Frost intended to be a simple outside zone play that McCaffrey inexplicably decided to freelance into a long overhand lateral pass to Alante Brown, who seemed stunned that the ball was coming in his direction. McCaffrey appeared to cross the line of scrimmage, then throw the ball slightly forward. Brown couldn’t catch the low throw, which rolled to an Illinois defender, who picked it up. The officials botched the play almost as badly as the Nebraska offense. They never threw a flag, then ruled it was a fumble recovered by the Illini, who quickly turned it into a touchdown and never looked back.

In just over a quarter, Illinois built a 21-7 lead as Nebraska devolved into an increasingly familiar pattern of ineffective offensive line play and inexplicable penalties at the worst possible moment. It’s becoming patented Husker football and it seems frozen in time.

True freshman running back Marvin Scott was effective when given a chance early in the game, gaining 20 yards on four first-quarter carries. He carried the ball into the Illinois end zone midway through the second quarter, but the fourth-down play was nullified by a holding call on center Cam Jurgens, and the Huskers settled for a field goal that cut the score to 21-10. They never came any closer.

The offense seemed to shrink as the game went on, and it lost all rhythm. Scott carried the ball only four more times. Most of the attack was based around ad-lib scrambles by McCaffrey, who ran the ball an astounding 20 times before halftime. Many of those carries were caused by poor pass blocking, which flustered the young quarterback into bail-and-scramble mode.

The Husker offensive line seemed even less prepared than McCaffrey. Seniors Matt Farniok, Boe Wilson and Brendan Jaimes whiffed on blocks and were shoved back into their ball carriers at about the same rate as the younger Husker o-linemen. The Husker front was beaten early and often by the Illini pass rush, forcing McCaffrey to rely on his schoolyard moves about two seconds into the play.

And we haven’t even gotten to the problems on defense yet.

After the game, Frost sounded a lot like Bo Pelini when he blamed lack of “consistency of execution” for the offense’s problems, citing bad snaps, missed blocks, bad protection and missed passes. Maybe that’s a good sign. Much of Husker Nation would settle for Pelini’s nine-win problems right about now.

”Nobody played good enough to win today,” Frost said. “I was embarrassed by our level of execution in all three phases. Right from the first snap, nobody played good enough to win. We got beat in every phase. We’ve got to stop shooting ourselves in the foot. We’ve got to execute cleaner. So that’s what I say for our young players, if we have to make it simpler so we can execute well, that’s what we have to do.”

He’s not wrong, but he’s got to find a way to address it. Neither McCaffrey nor Adrian Martinez has proven he can execute the short pass plays that his offense is built around. Simpler may well be better.

Frost was without his top two running backs, Dedrick Mills and Ronald Thompkins, who were sidelined with injuries, but he should have stuck with Scott at running back the majority of the time. Wan’Dale Robinson is one of Nebraska’s most explosive players, but the sight of the 5-foot-10, 185-pound Robinson lining up in the backfield next to the Husker quarterback will never strike fear into Big Ten opponents. He should be playing in the slot. If Robinson is running the ball six to eight times on inside zones, there’s not a lot of hope for the Big Red attack.

But then again, the o-line that returned all its starters has regressed from the end of the 2019 season, so maybe it’s not all that important who lines up at running back — or quarterback. Wasn’t the Frost offense supposed to be a forgiving one for offensive linemen?

If he’s going to lean heavily on the quarterback run game anyway, Frost might be ahead to switch to the I-option attack that he brought out of mothballs for one series against Ohio State last year, had success with, then put away for the rest of the season. That’s just one inexplicable moment in three seasons littered with them. Maybe the o-line would adapt to that style of offense better than it’s doing now.

Having sniffed the sweet savor of success against Penn State the previous week, it made sense that the Huskers would come out hungry for more. But there was no excitement and little in the way of execution. Frankly, at times the Huskers looked like a team completely unfamiliar with football. It’s amazing how a program can be so disciplined handling the exacting protocols necessary to avoid the COVID-19 virus, but so undisciplined when it achieves its reward, actuallly getting onto the field to play a game. Six penalties and five turnovers made this game brutal to watch.

When Illinois had the ball, things got even worse. The Huskers wore their alternate black jerseys, but if the tactic was supposed to fire up the troops, it failed miserably. The Blackshirts smeared mud all over their already-questionable reputation. They were about as inept as they were 13 months earlier against Indiana, who beat Nebraska 38-31 the last time the Huskers tried the black jerseys. Two Illini running backs each had more than 100 rushing yards, and quarterback Brandon Peters played one of the best games of his career.

Chinander’s defense is not going to stop anybody’s running game this year, but it has to limit the damage. Illinois gouged the Huskers for 285 yards on 52 carries, or 5.5 yards per attempt, and that’s with the statue-like Peters at quarterback, not the shifty freshman Isaiah Williams, who ran for nearly 200 yards against Rutgers a week ago.

The Chinander critics will be in full voice this week. His defense barely avoided another 500-yard game. Peters completed 18 of 25 passes for 205 yards and a touchdown. The d-line and linebackers cannot grasp how to handle counter or cutback action, and they leaked a lot of yards after contact. They’ll see more of the same in Iowa City next week.

Nebraska could have solved a multitude of problems by simply being opportunistic, but with apologies to C.S. Lewis, it was even worse than “always winter, but never Christmas.” Lovie Smith’s team gave Nebraska gift-wrapped opportunies to to get back in the game by putting the ball on the ground four times, but the Huskers could not recover a single one. Their historic inability to recover fumbles through the Pelini, Riley and Frost eras has been uncanny.

Would recovering a couple of fumbles have turned the tide against Illinois? It’s unlikely. A badly shaken Husker team and coaching staff were never competitive. There were steps backward on offense, defense and in the kicking game. NU fans had every right to expect their team to break even over the first four games, but the 1-3 start has the unthinkable in view — a fan base teetering on the brink of apathy, especially if the Huskers get a major schooling by the Hawkeyes on Black Friday.