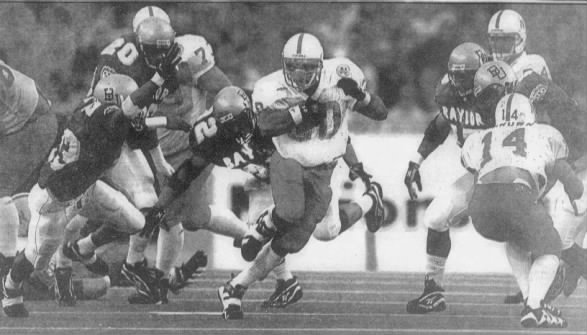 Third-ranked Nebraska continued its dominance of the Big 12 Conference with a 49-21 whipping of Baylor.

On a rainy night in Waco, Nebraska scored midway through the first period on an Ahman Green 3-yard run to take a 7-0 lead. On the next possession, the Bears stunned the Husker defense as Jerod Douglas scored on an 80-yard run to tie the game.

The rest of the first half was all Nebraska. The Huskers scored five touchdowns in a span of 14 minutes to take a 42-7 lead into the locker room. Joel Makovicka scored from 15 yards out late in the first quarter and Green put together his second-straight four-TD game with 58-, 2- and 30-yard scoring runs in the second quarter. Jay Sims capped the second-quarter scoring with a 2-yard touchdown run.

Scott Frost added a 1-yard score in the third quarter before Baylor scored twice in the fourth period.

Green rushed for 158 yards and four touchdowns on 20 carries, while Frost carried for 71 yards and threw for 103 yards. The Huskers piled up 27 first downs to just 12 for Baylor and out-gained the Bears 548 to 203.

Peter is having a spectacular year but is getting almost no fanfare. The guy is on a mission, all the time.

Another week, another Big 12 Conference cakewalk for Nebraska.

Baylor isn't the worst team in America. Nebraska just made it seem that way for much of Saturday night.