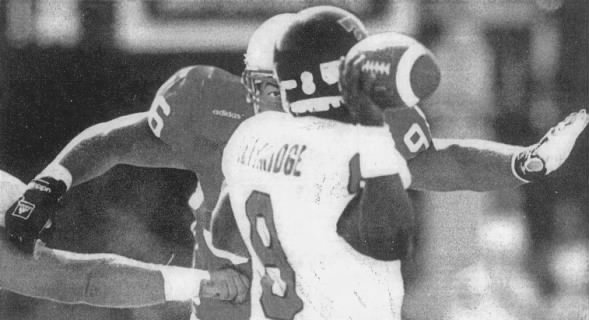 Texas Tech brought one of the Big 12’s stingiest defenses to Lincoln in hopes of ruining Nebraska’s Homecoming party. However, it was the Blackshirt defense that showed its strength, shutting out Texas Tech in a 29-0 Husker victory.

Texas Tech was held to six first downs and 127 yards of total offense. Leading the way for the Blackshirts was rover Mike Brown with nine tackles, while Jason Peter, Jason Wiltz and Octavious McFarlin each had six stops. The Nebraska defense also picked up four sacks for the second consecutive game.

The Red Raiders held Nebraska scoreless until late in the first quarter, when a 32-yard Kris Brown field goal gave the Huskers a 3-0 edge. In the second quarter Nebraska added 10 points on a pass from Scott Frost to Joel Makovicka and another Brown field goal, this time from 41 yards.

Brown added a third field goal in the third quarter, and offensive guard Jon Zatechka scored his first career touchdown by recovering a fumble in the end zone. Ahman Green closed out the Husker scoring with a seven-yard run early in the fourth quarter.

Green picked up his fifth-straight 100-yard rushing game with 178 yards on 24 carries.

The victory moved the Huskers to the top of the polls, marking the fifth straight season Nebraska had spent time atop at least one of the two major rankings.

This is Peter's and Wistrom's and Taylor's team, and they are determined to win and won't let the team slack off.

Let's just say it right now: Nebraska should be No. 1 today. Why? Because I'm a notorious homer. And because the Huskers have earned a bigger share of the ranking than anyone.

If a true college football playoff system were in place, none of the October debate over who's No. 1 would matter. But there's not and so it does.

Anybody want to argue whether Nebraska should be No. 1 in the Associated Press and USA Today/ESPN polls today?