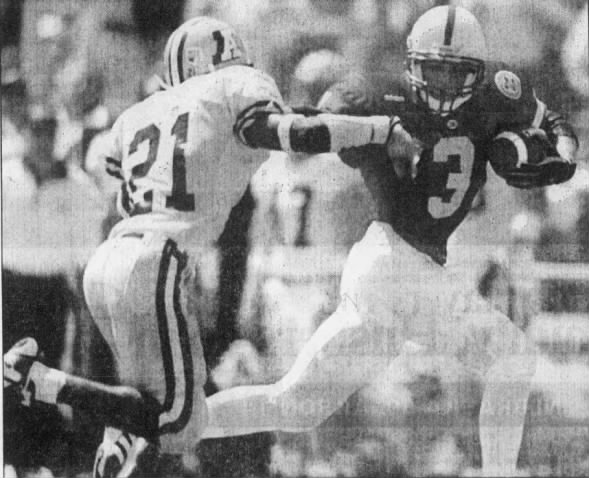 Nebraska opened its 108th season of football with a dominating performance against overmatched Akron in Lincoln.

Nebraska built a 38-0 halftime lead and cruised to a 59-14 victory in front of the 215th consecutive sellout at Memorial Stadium. The game also marked Nebraska’s 300th all-time win in the stadium since it opened in 1923.

Nebraska amassed 472 rushing yards and scored all eight of its touchdowns on the ground. Four Huskers scored two touchdowns each, led by quarterback Scott Frost, who rushed for 123 yards on 11 carries. Junior I-back Ahman Green tallied 99 yards and two touchdowns on just nine carries before leaving the game at halftime.

True freshman I-back Correll Buckhalter and junior fullback Joel Makovicka also had two rushing touchdowns each. Included in Makovicka’s day was a highlight-reel 20-yard touchdown run late in the first quarter in which he broke at least half a dozen Akron tackles.

The NU defense held the Zips scoreless until reserves entered the game in the third quarter.

A lot of our newer guys got their feet wet against Akron and didn't look too shabby doing it: Polk at linebacker, and of course Buckhalter and London in the backfield, and the Davison kid from Tecumseh snagging passes.

Nobody's sure if this was a good game or not. Fans expected a blowout, and blowout is what they got.

Let the record show that this game wasn't so bad for college football, after all.

Imagine being George Custer the night before Little Big Horn -- only you know it's coming. That was how it felt to be Akron football coach Lee Owens this weekend.