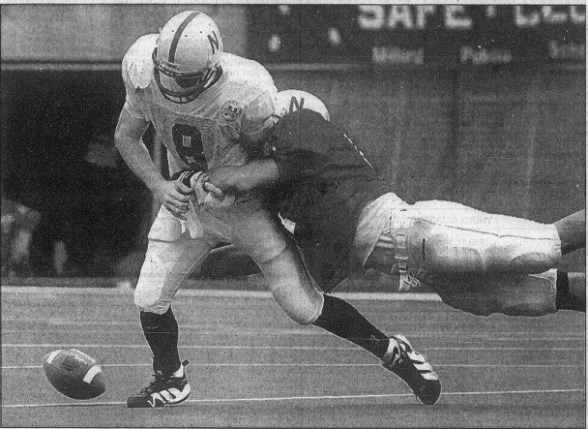 Aaron Wills knocks the ball away from quarterback Jeff Perino. The Reds recovered the ball at the Whites’ 4 yard line, 37 yards behind the line of scrimmage. · Lincoln Journal Star · Newspapers.com

Reds hold off rally by Whites in spring game

The Red squad jumped out to a 31-7 halftime lead and then held on to defeat the White squad, 34-28, in the annual Red-White spring scrimmage.

The determined running of Dan Alexander helped pull the Whites, composed of the No. 2 offense and No. 1 defense, back into contention in the second half. The redshirt freshman had 62 yards on eight carries and proved difficult to bring down on several occasions.

Ahman Green of the Reds led all ball carriers with 96 yards on 12 attempts.

Shevin Wiggins put the Whites in front early with a 78-yard punt return, but the Reds then reeled off 31 unanswered points to take a 31-7 lead into the locker room.

The Reds finished with 342 yards of total offense. The passing game struggled at times, with Reds quarterback Scott Frost completing just 3 of 16 passes in the first half. Frost also was sacked three times.

“He had a few dropped and had most of them close,” coach Tom Osborne said. “He was under a lot of heat. I thought from sitting upstairs, knowing what was called and knowing what the defense did and so on, he did a pretty good job today.”

All-America rush end Grant Wistrom left the game after suffering a compound fracture and dislocation of his right pinkie when trying to tackle Frost. He said he could have returned to play if it had been a real game.

Frost said he was impressed with the defense. “It’s pretty exciting to see that we lost eight guys to graduation from the starting defense and we have the talent to replace them right away this spring,” he said. “It didn’t seem to me like we were missing much on defense.”

The top offense scored two touchdowns and a field goal in its 13 possessions against the top defense, and was forced to punt 10 times.

Scott Frost was hopefully not in midseason form with a 7-for-27 day passing and 18 carries for 31 yards.

For those who like watching monster trucks smash cars ... it would be easy to find pleasure in watching freshman I-back/fullback Dan Alexander run.