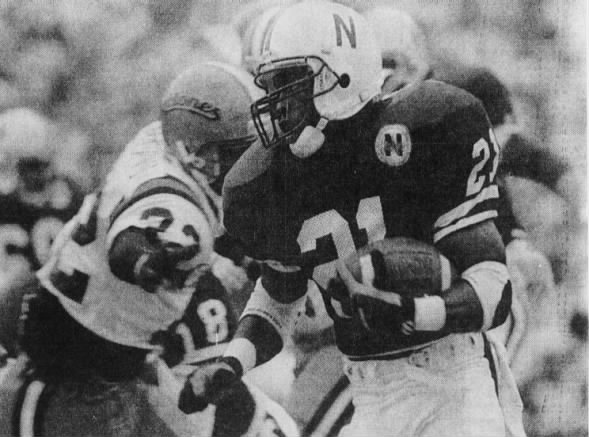 A week after being knocked out of the Kansas game, Derek Brown rushed for 107 yards. · Des Moines Register · Newspapers.com

After slow starts in each of the two previous games, 11th-rated (AP) Nebraska came out smoking against Iowa State, scoring on each of its first four possessions to take a 24-0 lead midway in the second quarter on its way to a 38-13 win.

“We didn’t want what happened last week to happen again,” said offensive guard Erik Wiegert. “We really wanted to get off to a good start.”

The game was barely two minutes old when the Huskers scored their first TD, on a 1-yard run by quarterback Keithen McCant, with the big play in the 82-yard drive a 49-yard pass from McCant to tight end Johnny Mitchell that carried to the ISU 3.

Nebraska then drove from its 12 to the Cyclone 18 and settled for a 35-yard Byron Bennett field goal and a 10-0 lead. The Huskers scored again early in the second quarter on a 4-yard run by I-back Calvin Jones, set up by a 42-yard run by McCant and a 26-yard run by I-back Derek Brown.

NU made it 24-0 with a lightning drive, moving 80 yards in two plays, a 25-yard run by Jones and a 55-yard TD pass from McCant to split end Jon Bostick.

The Cyclones cut it to 24-6 at halftime on a 1-yard TD run by Kevin Caldwell in the final minute of the half, set up by James McMillion’s 55-yard punt return to the Husker 1.

Nebraska scored on its first possession of the second half to increase its lead to 31-6 on a 32-yard TD run by Brown. The Cyclones closed to 31-13 on Caldwell’s 11-yard run early in the fourth quarter, but Jones iced the game for Nebraska with a 61-yard score with 6:45 left.

“I think at the half we wanted to gain control and momentum, and we did that, and that seemed to be good enough,” Nebraska coach Tom Osborne said. “Then, we substituted and from the middle of the third quarter on, we didn’t look sharp.” The win upped Nebraska’s record to 8-1-1 overall and 5-0-1 in the Big Eight, putting the Huskers within one win of their first trip to the Orange Bowl in three years. Iowa State fell to 3-6-1 and 1-4-1.

For the only time all season, Brown and Jones both topped 100 yards rushing in the same game, Brown finishing with 107 yards on 15 carries and Jones with 121 on nine.

Notes: When the Huskers lost a fumble in the fourth quarter, it was NU’s first turnover in 16 quarters, a span which encompassed an even 300 offensive plays and 30 returns … The win was Nebraska’s 14th in a row over Iowa State … The crowd of 76,078 marked NU’s 181st consecutive home sellout since 1962 … Cornerback Tyrone Legette broke up his eighth pass of the season, tying a school record.

Quote of the game: “I’ve never seen a team score so many points from so far out so often. I mean, if it gets any bigger-play than this, I’m going to quit coaching.” – Iowa State Coach Jim Walden.