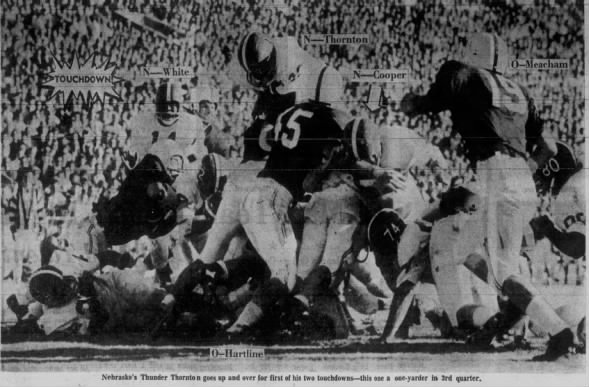 Thornton gets NU on the scoreboard in the third quarter · Lincoln Journal Star · Newspapers.com
Nebraska 17
Oklahoma 14

Huskers rally, make it two in a row against Sooners

A 68-yard touchdown run by Bill “Thunder” Thornton and a 28-yard field goal by Ron Meade in the final quarter led Nebraska to a 17-14 comeback win over Oklahoma.

Meade came off the bench with 1:38 left in the game and booted the ball through the uprights to upset the Sooners. Thornton, a 185-pound alternate sophomore fullback, scored twice in the second half for the Cornhuskers, who trailed 14-0 at intermission.

The Sooners took just five minutes to score after the opening kickoff, moving 81 yards in 12 plays. Halfback Mike McClellan got the touchdown on a 23-yard run.

Oklahoma scored again early in the second quarter when Jimmy Carpenter tossed a long pass to end Ronnie Payne, who caught the ball at the 15 and sped into the end zone. The play covered 49 yards.

Midway into the third quarter, Nebraska drove 54 yards in 10 plays for a touchdown, scored by Thornton on a one-yard dive. Quarterback Pat Fischer provided two points on a run around right end from a fake kick formation.

In the fourth quarter came Thornton“'”s long scoring run on a burst through the center. He bowled over blitzing OU defensive back Monte Deere, who recalled afterward, “Nobody blocked me. He just flat ran over me.” Payne blocked the Cornhuskers' extra-point kick, leaving the game tied, 14-14, until Meade booted the go-ahead field goal in the final two minutes.

It was the second time for Meade to come through with heroics against the Sooners. Last year, Meade kicked two field goals as the Cornhuskers edged the Sooners 25-21 for OU’s first conference loss in 75 games. This year’s Sooners, however, entered the game on a different sort of streak: It was OU’s fourth consecutive conference loss.