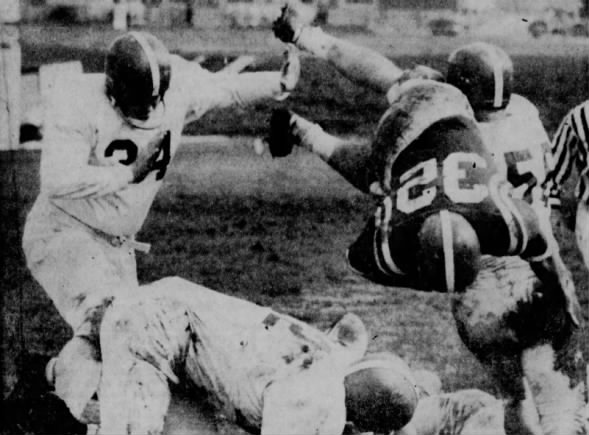 After a scoreless first half, the Varsity racked up three touchdowns in the final 30 minutes for a 22-0 win over the Alumni.

The Varsity attempted just four passes all afternoon in a game played on soggy turf.

The 0-0 deadlock was broken after the Alums’ Frank Simon fumbled on a hard hit by Carroll Zaruba while returning the opening second-half kickoff. With Tom Kramer at quarter­back, the Varsity drove 42 yards in 11 plays. Pat Fischer scored the touchdown on fourth and goal from the 1 yard line on a pitchout from Kramer.

The Alumni responded by driving to the Varsity 3 but lost ground from there and had to settle for a field goal attempt, which was blocked.

In the fourth quarter, the Varsity put together a 10-play drive from midfield, capped by Dallas Dyer’s 5-yard touchdown run off right tackle.

The final TD, a 12-yard pass from Kramer to Mike Eger, came with less than a minute left and capped a 39-yard drive after the Alums had turned the ball over on downs.

• Fred Lorenz, a four-letter winner in football (1944-47), was brought to the game by ambulance from a Grand Island hospital to serve as the Alumni’s honorary coach. He died 13 days later after an illness of eight months.

• Quarterback Dean Cozine and tackle Roland McDole, both of the Varsity, received trophies for outstanding play.

• It was the most lopsided score in the history of the series. The Varsity had never won by more than three points.