Nebraska overwhelmed Iowa State with special teams and defense, as the Huskers improved to 7-1 on the season and 3-1 in the Big 12 North with a 28-0 victory over the Cyclones last Saturday at Memorial Stadium.

The Huskers, who clinched a 42nd consecutive winning regular season with the victory, blocked two Cyclone punts, including one that was returned for a score, and forced three turnovers to avenge a 36-14 setback to ISU in Ames last season. The Huskers struck early, converting two blocked punts into touchdowns en route to a 21-0 first-quarter lead in posting their 13th consecutive win over the Cyclones in Lincoln. It was the third straight year that NU blocked at least one Cyclone punt, while the two blocks on Saturday marked NU’s highest total since a two-block effort against Kansas last season. 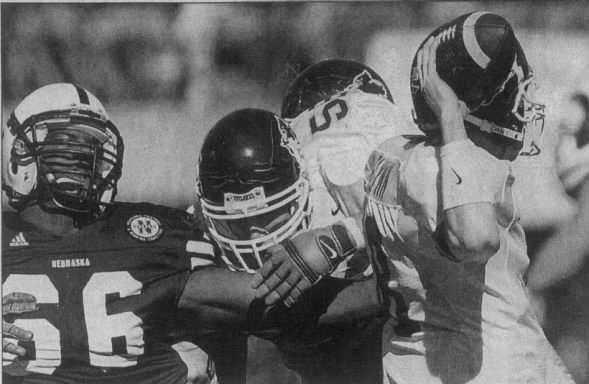 Nebraska posted its second shutout of the year and has not allowed an offensive touchdown in eight quarters – dating back to the fourth quarter against Missouri on Oct. 11. At home, the Blackshirts have been even stingier, not allowing an offensive touchdown in its last 14 quarters, dating back to Sept. 13. NU allowed just 95 yards before halftime, as the Cyclones did not cross midfield until 1:48 remaining in the half, and allowed just 230 yards of total offense in posting their second shutout of the season.

Josh Bullocks, who entered the contest with a nation-leading seven interceptions, sparked the Huskers on special teams with his first career punt block, giving the Huskers possession at the 19-yard line. NU capitalized on the block, as Jammal Lord scored on a one-yard run on fourth-and-goal, giving the Huskers a 7-0 lead.

The Huskers showed their big-play potential on the next series, going 79 yards in three plays to extend the lead to 14-0. Lord, who didn’t play in the second half, broke open a 2nd-and-1 play for 31 yards to the ISU 39 before the Husker QB had a key block to spring wide receiver Isaiah Fluellen for a 39-yard scoring jaunt around left end.

Fluellen, who entered the game with 17 yards rushing on three carries, led Nebraska with 78 yards on five carries, as Nebraska totaled 282 yards on the ground. The Huskers were able to spread the wealth, as nine different players had at least one rushing attempt, while four NU players rushed for at least 40 yards.

The opportunistic Blackshirts helped NU extend its lead to 28-0 on Josh Davis’ one-yard plunge with 8:46 remaining in the half. Trevor Johnson stripped Cyclone quarterback Austin Flynn, and Benard Thomas recovered at the ISU 21-yard line. Lord, who completed 2-of-3 passes for 19 yards and rushed for 46 yards on five carries, found Matt Herian for a 16-yard completion to the ISU 5-yard line before Davis capped the drive with runs of four yards and one yard, leaping over the pile for his second score of the season.