Nebraska added to one of the nation’s most lopsided college football matchups, defeating Kansas, 45-7, at Memorial Stadium.

The victory was the Huskers’ 34th straight in the series, the second-longest active winning streak against an opponent in college football. In the process, Nebraska also picked up a win on Homecoming for the 34th straight season. 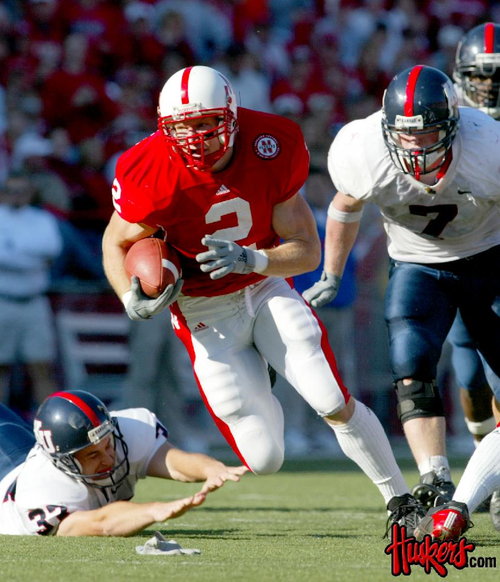 Aaron Terpening runs for a touchdown from the KU 30 after a blocked punt in the third quarter. | Courtesy: Scott Bruhn/NU Athletic Communications

Aaron Terpening runs for a touchdown from the KU 30 after a blocked punt in the third quarter. | Courtesy: Scott Bruhn/NU Athletic Communications

Kansas struck back quickly with a 50-yard touchdown pass from Jonas Weatherbie to Byron Gasaway to even the game at 7-7. However, Kansas would not score again and the Husker ground game and defense took control of the remainder of the game.

Freshman I-back David Horne put together two straight 30-yard runs on a drive midway through the first quarter to give NU a 14-7 edge. Early in the second quarter, DeJuan Groce put Nebraska in great field position with a 24-yard punt return, and Nebraska drove 47 yards in seven plays to take a two-touchdown advantage. Jammal Lord capped the drive with a 27-yard touchdown pass to Wilson Thomas.

A breakdown in the Kansas punting game gave the Huskers a short field once again. This time the Huskers drove inside the KU 10-yard line but settled for a 27-yard Josh Brown field goal to give NU a 24-7 lead, an advantage it would carry into halftime

Nebraska opened the second half with a five-play, 80-yard scoring drive to build a 31-7 lead. Lord threw his second TD pass of the afternoon, a 12-yarder to Aaron Golliday, to cap the drive.

Nebraska quickly added to its lead courtesy of the special teams. Lannie Hopkins blocked his second punt of the day, and senior rover Aaron Terpening returned the ball 30 yards for a score for a 38-7 lead.

Nebraska substituted freely throughout the second half, with a season-high 111 players seeing action.

The Huskers relied on their running game, topping 300 yards for the fifth time in the past six games with 352 rushing yards. Both Horne (122) and Diedrick (107) topped 100 yards on the ground, marking the first time this season a pair of Husker running backs eclipsed the century mark.

Coach Frank Solich
Opening Comments
“We’re definitely pleased with the win and the fact that it gave us a chance to play an awful lot of players today, guys who have not seen the field much, if at all, this season. In the end, it gave us a mixture of guys to make some plays with. A lot of things went well today. Obviously, there are some things we need to do better as we go into our last two football games against Kansas State and Colorado. Those are excellent football teams that we’ll be facing. On the offensive side of it, we’ll have to throw the ball and have a better passing game than what maybe we displayed today. That does not come back to any one particular person, it was a combination of things that happened. We were able to run the ball very well. If you look at our I-backs’ average per carry, I think David (Horne) carried nine and had about 13 yards per carry or a little above, and I think Dahrran (Diedrick) had something like 8.9 yards per carry. That’s a lot of productivity from the I-back spot, with not a lot of carries.

Offensively, it was not a real smooth performance all the way through. There was a lot of excellent individual plays, and a lot of great effort again. Defensively, I think we got stronger as the game went on and took control of the game. Special teams I thought played out pretty well for us again today.

If you look at it from the standpoint that going into the game, Kansas was operating with their second-string quarterback, and then ended using their third-string quarterback an awful lot. That puts them behind the eight ball a little bit, and that is not taking away at all from what our defensive did as the game went along. The only reason I mention that is I think Coach Mangino is battling very hard, and I think his players are battling very hard. As a coach you always appreciate that.

On the passing game.
“There were some passes that were batted down, one that Jammal had to throw over some people, and that one went over the end zone. It was a combination of things that didn’t allow the passing game to advance very well. It’s not that we just filled the air with the ball, we had something like 15 passes in the game, some of those were play action some of them were straight drawbacks where they blitzed the line and we tried going to a hot receiver on the side trying with a slant, and some pitches where they were able to get the ball batted down. It’s a combination of those things that kept us probably from throwing the ball well. It’s obvious that we need to have a good game when we go against Kansas State because they have a great defense and can score a lot of points. We’ll need to be operating at full efficiency on both sides of the ball.

On Jammal Lord
There were a few passes that weren’t perfect spirals and maybe he floated a little bit on them. But, I think that all-in-all he came through with a very good game again. We’re very pleased with where he’s at. He shows signs as you go through the year and take plays out, you have the ability to see an excellent thrower. His throwing game comes down to a lot of things: it comes down to protection, the routes that the receivers run. We had a couple of breakdowns which didn’t help. The bottom line is we’re going to have to throw it better, but it’s not anyone in particular’s fault.

I-back Dahrran Diedrick
Did it feel good to break the 100-yard rushing mark?
I just think it feels regular, I don’t feel anything special about it. I’m glad it happened, and I’ll try to let it happen next week and every other game we play. I’m just so glad we were able to get back out there and get on the winning scene. We’re bowl-eligible now, and now I want to win the next two games more than anything.

On your career-long 53-yard run for a TD, did the lane just open up perfectly for you?
The offensive line did a great job. As soon as I got the ball, I saw a big cut-back lane and ran after it. Then we just went after it the rest of the day.

Rover Lannie Hopkins
Talk about NU’s special teams play against Kansas.
We work hard on special teams throughout the week and it showed today. I just found a crease on a couple of (the punt blocks) and was able to get to the punter. It’s nice to get the two blocked punts, but I want to just do whatever I can to help the team.

How good was the defensive performance today?
We did an excellent job today. We could have stopped them a little more at the end, but they started moving the ball in different ways. But either way, it was a good day.

Rush End Trevor Johnson
Talk about the defensive line production today and the push everyone was getting.
We really got after the quarterback and we were getting a lot of pressure on him. That was one the things we wanted to do coming into the game. One of our biggest goals was to stop the rush and I think we did that today.

Did it feel good to get back on the winning track?
I does. Kansas is a good team, but we wanted to play well today and show people that we could bounce back because things didn’t work out as we wanted them to last week.

Center John Garrison
Talk about the offensive line performance, helping the rushing game get going.
We really did have a good game. The point we are at right now, things are starting to come together. They have been coming together for the past couple weeks. There were a few mistakes we made out there, but it’s a week-by-week thing. Now we need to focus on preparing and getting ready for Kansas State.

Did it feel good to get Diedrick a 100-yard rushing game?
Yes it did. I found out Dahrran was out for the game, and the first thing I did was go over and ask if he got to 100 yards. It’s been somewhat disappointing to him in terms of reaching 100 yards this year, so it’s good to see that.