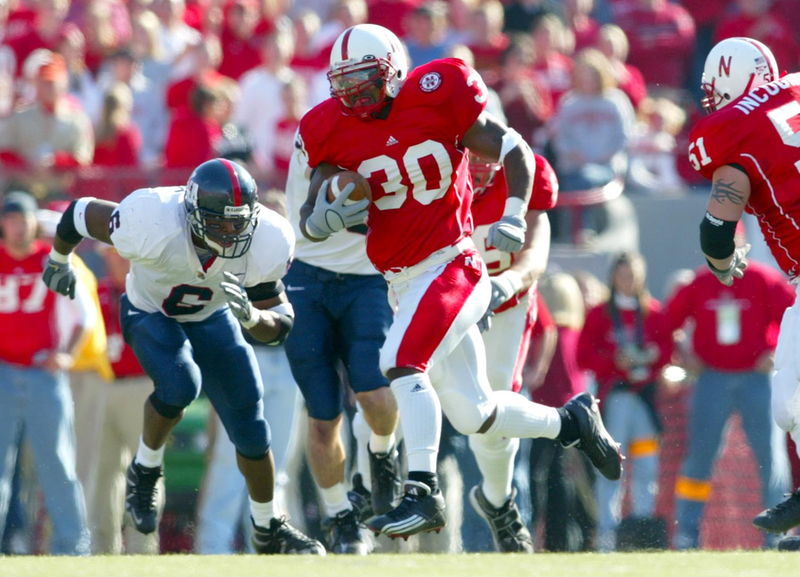 Dahrran Diedrick breaks free for a 53 yards and the Huskers’ first TD. | Courtesy of Huskers.com

Nebraska reached bowl eligibility by breezing past Kansas, 45-7, in the Huskers’ 34th straight victory in the series.

I-backs Dahrran Diedrick and David Horne each rushed for over 100 yards, while Jammal Lord threw a pair of touchdown passes and became the 18th player in NCAA history to rush and pass for 1,000 yards in the same season.

On its first possession, Nebraska drove 81 yards in six plays, capped by Diedrick’s 53-yard touchdown run. Kansas answered quickly with a 50-yard touchdown pass from Jonas Weatherbie to Bryon Gasaway, but the Jayhawks would not score again. Their chances were not helped when Weatherbie suffered a season-ending knee injury later in the quarter.

After leading 24-7 at halftime, the Huskers struck for two touchdowns in the first five minutes of the third quarter. The second score came when Lannie Hopkins blocked a punt and Aaron Terpening returned the ball 30 yards to the end zone for a 38-7 lead.

Nebraska substituted freely throughout the second half, using a season-high 111 players.

The problem I have is that we didn’t work on our passing game enough. But this game got us into a bowl, and this year that is a big deal

What matters is the bowl trip. Is that what Nebraska football has come to? Yes. The bowl streak is alive. In this day and age, that’s not to be trivialized.

Saturday was a great day for a 45-7 bird barbecue. Unfortunately for the Huskers, picnic time is over.

Solich’s team was still suffering a bit from a Texas-sized hangover.

Nothing spectacular, just getting it done and getting the W under the belt.

Aside from some chippy passing at times, it appears that the Big Red Machine is primed and ready for the stretch run.