Dennis also was the starting quarterback when the current NCAA record streak of 262 straight sellout games in Memorial stadium was started on November 3, 1962. Dennis has agreed to sign 262 plus copies of that first program along with co-captain Bill "Thunder" Thorton as a fundraiser for the Bob Terrio Classic.

This interview with Dennis was done by David Max on May 18th, 2004.

DM Where are you from originally?

DC I grew up in Arizona and attended junior high and high school in Minnesota.

DM You were recruited to Nebraska before Bob Devaney became coach. Who were you recruited by?

DC I was recruited by the head coach Bill Jennings and his assistant coach Leroy Pierce who recruited Minnesota and had direct contact with me.

DM Were you recruited by other teams?

DC Yes, I was recruited by Minnesota, Wisconsin, and Colorado in addition to Nebraska.

DM What made you choose Nebraska?

DC Being very young and immature at the time the reason I went to college was more to play football and I gradually got smarter as I was in college. The best opportunity to play appeared to be at Nebraska than any of the other schools so that's why I chose Nebraska.

DM Out of the four schools did you feel that Nebraska was the best school or offered the best playing opportunity.

DM What was the feeling amongst the players when Bill Jennings was fired?

DC I think overall it's disappointment anytime that a player is at a school and a coach get's fired. I think it is the unknown. You knew what was there. You knew the coaching staff and their philosophy and how things worked and you bring somebody in and maybe he's got different ideas and different philosophy and everything is kind of up for grabs and you don't know how you're going to fit into that system and everybody was a little uneasy.

DM What was your first impression of Bob Devaney?

DC I thought it was fantastic! He came and met all the players in the basement of Sellick Quad and had a meeting there and introduced himself and introduced Jim Ross. He told us a little bit about what he wanted and what he expected and he had evidently talked to some people that had informed him of our dislikes from the previous staff. Every player's going to have dislikes and we had a lot of long practices and scrimmages during the week and things like that. He came out and said we're not going to do this and we're not going to do that and these are the things that we will do. He also said every position is open and everyone is going to have an equal right to play for that position so all of those guys that hadn't been playing were of course very excited and he carried that through.

The first meeting was very good, very positive and of course with his wit and humor he got everybody on his side right away.

DM So his coaching style was a lot different than Bill Jennings.

DC Yes, with Bill Jennings it was primarily a power type offense and in the old days it was a full house back field and no split ends and no nothing and it was pretty much run at them and you might do a few things. You might run an option or an option pass or a few drop back passes but probably 80% of it was just plain power football.

Devaney brought in an unbalanced line, a split end and changed the philosophy as to how we did things and why we did things. He really involved the quarterback more in some of the decision making in the offense so it was kind of an exciting thing for me. 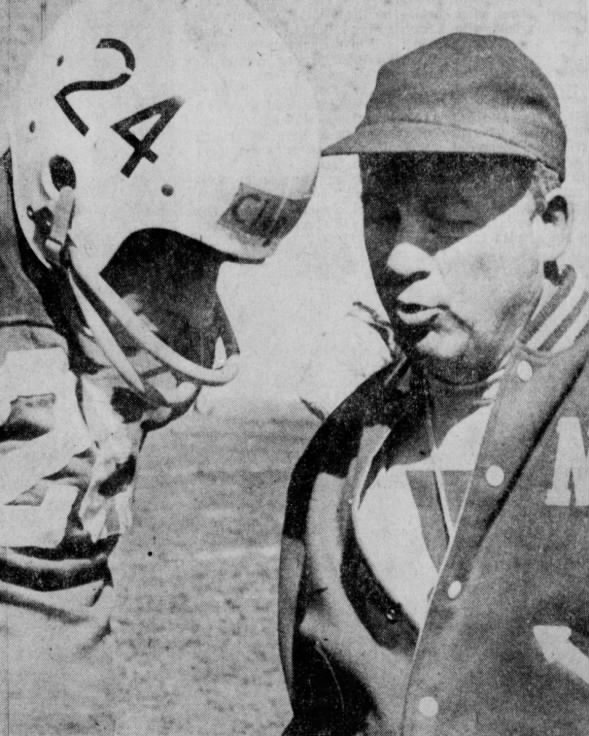 DM Did you call the plays yourself or were they sent in from the bench?

DC The quarterback got to call the plays and that was the fun part of being quarterback. When you're on the field and when you hand it off you can watch how the defense reacted and you could see who was doing what and what their attack points were. You could modify the game according to what you saw on the field.

And then also, when you came off the field you would talk to them or I always tried to have a good rapport with the linemen and I would always ask each of the linemen "How is your guy?" and back then they played variations of defense that were a lot more basic and you would ask a guy and he would tell you He's really tough. I can hold him but that's about it. Or some other guy would say I can take him inside all day but I can't take him outside. You would design your game plan according to what your linemen told you and what you saw. At half time, Bob Devaney was a master at figuring out what we could do to take advantages of those situations also. The quarterback, actually in those days called the plays and kind of trying to see what would work. I don't mean to say a coach on the field. It wasn't that. You had to be really thinking out there.

DM Do you have a favorite Bob Devaney game story?

DC Oh, gee whiz. I guess one that I wasn't involved in that I heard about is my favorite because it sounds just like Bob and I forget when it was. It might have been when Van Brownson and Jerry Tagge was playing. I think they were behind at half time and everybody was waiting for him to come into the locker room and half time was about over and he walked in and put his head in the door and said "Sorry ladies, I was looking for my team."

That was his half time and I think they went out and won the game. I wasn't there but that's what I heard and that sounds just typical Bob. He was a fantastic coach.

DM What was your best Bob Devaney memory of the win over Miami in the 1962 Gotham Bowl?

DM If I remember right it was really cold that day.

DC Oh, it was brutal. The field was frozen. It was miserable conditions but it was probably one of the better bowl games that I've seen.

DM What was your best memory of the win over Auburn in the 1964 Orange Bowl?

DC That's the one thing that I'm glad for that game for the run that I made because it gave people something to remember you by. If it hadn't been for that I'm sure there would have been memories but whenever you talk to somebody that's reminiscing about the days gone by, that run is one thing that they remember. (68 yard touchdown play on the second play from scrimmage.)

DM I remember reading in the paper afterward about that run and you were quoted as saying that it was designed to only gain 2 or 3 yards.

DC Yeah, it wasn't really a goal line play but it was kind of a short yardage type play. It was a quick hitter and I don't know if they had the defense set to go the other way or just what they had done but we caught them by suprise and it couldn't have worked any better.

DM Most people are unaware that you were not only the starting quarterback but that you also were the punter and played defensive back.

DC Well, back in those days you played both ways and as a sophmore anyway depending on the defense I was a cornerback or an outside linebacker. As a junior when Bob came I think you could substitute two people and so he took me out and I think the center Rod Mishka. He took us out and put in people better fit for those situations. As a senior it was the same thing so that was the end of my defensive career.

DM What was your most memorable regular season victory?

DC The biggest one that I remember is my senior year when we beat OKlahoma. In those days OU was the top dog and the team that you wanted to beat and our whole season revolved around winning as many games as you could but the maximum effort was against Oklahoma. As a junior we were tied with Oklahoma and when we played down there they just kicked the tar out of us. Monte Deere was the quarterback and he threw about 3 touchdown passes against us. I don't know if he threw 3 touchdown passes all year prior to that game but he did against us.

The next year we played here and they had Ralph Neely, their big tackle and we had Lloyd Voss and Bob Brown and those guys and we handled them pretty good.

DM How does it feel to be the starting quarterback on the team that started the consecutive sell out streak of 262 games and counting at Memorial Stadium?

DC I guess it one of those just amazing things that when you come down here who would have ever thought that you'd have been the start of something. It's hard to fathom. Just to have been part of that transition when Bob came here and to go from the previous 10 or 15 years when they weren't very good and Bob took us to 9-2 right away and the next year we were 10-1. That's the memory that I have most that I would be proud of that I had the chance to be a part of the first team that got things started as far as the great winning tradition that has carried on for 40 years.

DM What was your first contract with the Green Bay Packers worth?

DM You were with Green Bay for two years and Atlanta for one. Did you just decide to retire after the third year or did you have an injury.

DC There's two parts to it. I came to Nebraska because I wanted to play. I loved football. It was my life and I wanted to play it. I didn't want to sit on the bench. So that's why I went to Nebraska. When I went to the pros it was a different level of competition. I think that I was an adequate professional quarterback. I probably could have hung around but I was just plain not good enough to be a regular starter or player. When you're around those people you look and you can tell that you have talent that is just not quite the talent that you need to play at that particular time.

DM What are you doing now?

DC I'm an orthodontist in Lincoln and I have a satellite office in Fairbury for a number of years.

DM Do people still recognize you as being Nebraska's first quarterback of the Bob Devaney era?

DC Oh, I think a few old timers like you but they have had so much success. So many national championships and it's only right that the focus should be on the kids that have played in, oh, the last ten years. Ten years from now they will forget some of the other great players that were on those championship teams and remember the newer ones. That's just the way it is.

DM Do you still go to Nebraska games?

DC Yeah, I enjoy going to games but I enjoy going to the competitive games. If there's a team where it's not going to be real close I don't enjoy that as much except for maybe the first game to see the new players and see how things are going. When you're playing Oklahoma, or Missouri, or Kansas State I love those games.

DM Dennis, thanks for taking the time to talk with us.