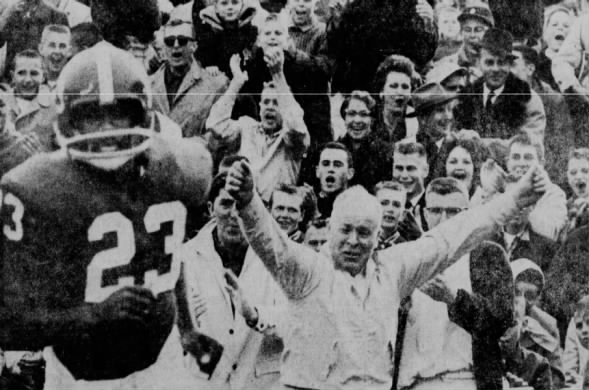 Nebraska quarterback Pat Fischer turned from goat to hero in a matter of moments and led the Huskers to a 14-9 win over Army.

The Cadets took a 9-0 lead with about six minutes left in the opening half after Fischer fumbled a punt and Albert Vanderbush recovered on the Nebraska 9. Three plays later, fullback Al Rushatz bulled into the end zone from the 1.

Fischer wasted little time atoning for his flub. On the second play after the Army TD, he faked niftily on a bootleg play and sped around end for 64 yards to the Cadet 14. Four plays later, Fischer scored from two yards out, giving the Huskers their first touchdown in three games against Army. With Ron Meade's conversion kick, Nebraska trailed by just 2 points.

In the third period, Fischer again fooled Army on a bootleg play. This time, he let halfback Bennie Dillard get into the open and connected on a 57-yard pass play for the go-ahead touchdown. It was the Huskers’ only pass completion of the game.

The Cadets outyarded the Huskers by 324-198 and had an 18-5 advantage in first downs. But the Cadets were halted twice at the NU 5 yard line, and the game ended with an incomplete Tom Blanda pass into the end zone.