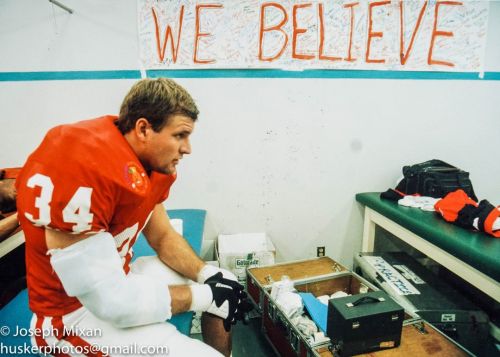 Excerpted from Chapter 23, No Place Like Nebraska: Anatomy of an Era, Vol. 1 by Paul Koch

Across the river from Iowa is Nebraska, and Omaha … the second tier of states beyond the Mississippi, prairie on the east and arid on the west. It is like its eastern neighbor in its soil – fine, deep, level, and easily tilled… She found to her sorrow that corn could not regularly be grown west of the middle of the state, and hence adjusted herself to the environment, by pasturing the west and plowing the east; Typical of the progress of this young and physically monotonous state, her state University gathers at Lincoln two thousand of her sons and daughters, and takes no place inferior to cattle or corn in the hearts of the citizen of the plains.

Born in Sioux City and raised in Polk City, Iowa, business management guru W. Edwards Deming once replied to an underling’s challenge while guiding Japan’s post-nuclear, World War II recovery, “It is not necessary to change. Survival is not mandatory.” (emphasis mine) Whether spoken tongue in cheek or pointedly sarcastic, he had a point by any measure. Change is inevitable, and one man who experienced much during and since the 60 & 3 era is Trev Alberts. Never one to shirk responsibility, defer accountability or shun the glare of probing eyes and lights, his peer leadership was notable and noteworthy while a Nebraska student/athlete.

Our conversation took place early in my book-writing process, as he now presides as the University of Nebraska-Omaha’s Director of Athletics. Survival is not mandatory? Ask Trev and I guarantee you’ll get a contrarian answer. Let’s catch up with the man in life’s mid-stream.

“There was real leadership, a real understanding of what was important, that Coach O really understood the bigger picture of collegiate athletics. It wasn’t just about wins and losses, but about developing young men.”

Where are they now? Omaha, NE, Administrator

Question: Thanks for your time, Trev. Do you recall your first day on campus as a freshman?

Trev Alberts: I certainly can. It was the summer of 1989. And you know football was always very important in my life, but I have to tell you, I felt like I was a fairly well-rounded student-athlete. I liked football, but school was important to me as well, and I think the thing that really struck me immediately when walking on campus was how important football was to the state of Nebraska: the culture of the football team, that group of guys that the state could really take some pride in. I understood it just wasn’t necessarily playing football with my buddies.

Now, it would turn into that -because I would make some lifelong friendships and relationships- but I think it was really an understanding of how important football was and what was expected. And of course, my four years, it never diminished, because it was very important to the university, to the state. It was the unifier, the common cause Nebraskans could feel good about or mourn together over. It was a real link and it was important to our state -not that I felt a burden or anything like that as a young student/athlete- but I certainly understood my responsibility and my part in the game.

Q: Growing up in Cedar Falls, Iowa, and home of University of Northern Iowa, what was your favorite team as a kid?

TA: By far it would have been the Iowa Hawkeyes. We were inundated with Iowa coverage, so it was Chuck Long, Gordie Bohannon, Larry Station, I knew ’em all. Guys I really admired, knowing about them all.

Q: So how the heck did you end up at Nebraska?

TA: I really intended to go to Iowa. It was a place that I admired and in Hayden Fry’s hands, who’d really turned the program around. The Hawkeyes had recently fallen on hard times (though we were all well aware of what Coach Fry had done), but we really took a trip out to Lincoln to ‘enjoy a free weekend’, get to know the little state to the west.

We had no idea what we were about to experience. My parents were obviously very integral in the decision-making process. We had a chance to go out and meet the coaching staff and meet the people in the athletic department, and there was this real sense of family. You know, Nebraska was just competing at a different level at that point. There was a standard of excellence, we could really tell the community was largely driven by not only the university, but the football team’s success. In the short time with Coach Osborne and learning a little bit about his values and his expectations, it was a real drawing point. There was real leadership, a real understanding of what was important, that Coach O really understood the bigger picture of collegiate athletics. It wasn’t just about wins and losses, but about developing young men. Obviously it was something I was drawn to immediately.

Q: Was it a game day you visited?

TA: No, it wasn’t.  It was actually quite late in the recruiting process. I wasn’t a highly recruited player, I wasn’t actually recruited much at all. I gather, and I’m not for sure, but I think they probably missed out on a few big-name linebackers and sort of went down the list a bit and came across this rather gangly kid from northeast Iowa. But it was a natural fit. I had the same values as the coach and the Athletic Department, so it was a nice fit. 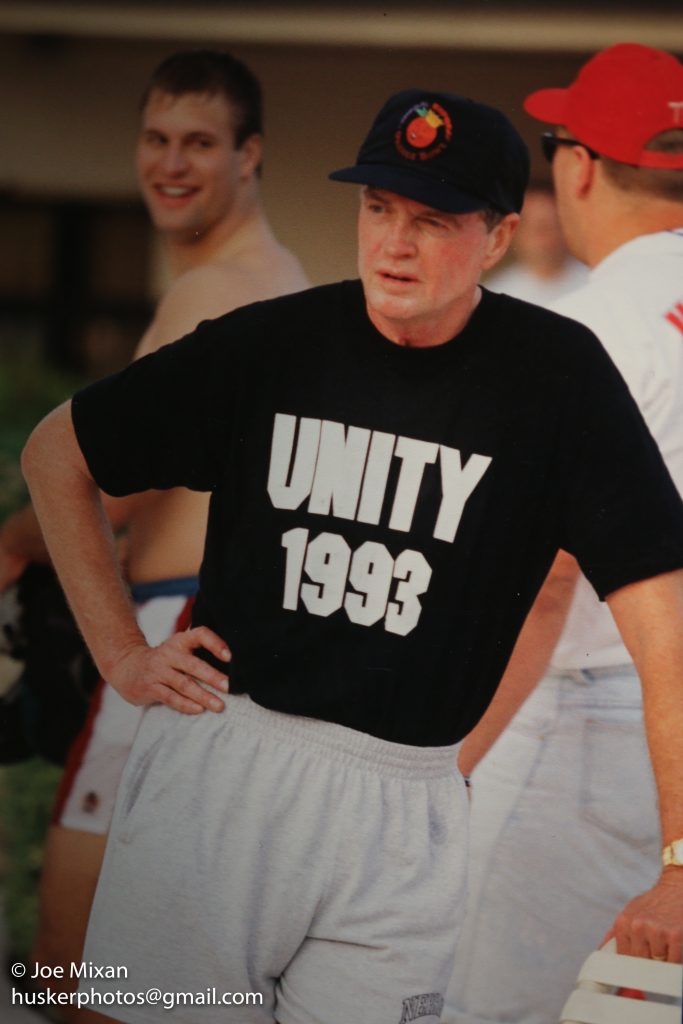 Q: Were you a farm or city kid?

TA: I was actually a bit of both.  It was a unique upbringing in the sense that I was the farm kid but I lived in town. My father grew up a farm kid, and so did my mother, but my mom didn’t want to live on the farm. So my dad went to University of Northern Iowa and got a business degree and he actually worked at the Cedar Falls utility company as the general manager, but also bought a farm from his father -my grandfather, who died early in life- so we farmed about 300 acres of corn and soybeans in Allison, Iowa, which was about 35 miles northwest of Cedar Falls. So I spent most of my evenings and Saturdays on the farm, but I never did actually sleep there. So you got to enjoy the benefits of living in town, but you also learned how to work on the farm.

Q: Sounds a lot like my upbringing. There was never anything lacking on the to-do list, no?

TA: That’s right. Never had much time to sit around. My mom and dad never really played sports, but my older brother did. And then I thought I’d be real smart and go out for every sport so I’d get out of having to work, but all that happened was my dad would wait for me to get home from practice and then we took off. So as soon as I got home from practice we had to work, it didn’t work out too well for me. (laughs)

Q: Any differences between Iowans and Nebraskans?  Or would you lump them together as Midwesterners?

TA: You know what, I really would. I’d lump them together.  I still really respect the people of Iowa, the Iowa people. I’m still a fan of Iowa football, I love the Iowa people. I watched the people of Cedar Rapids with great pride when the flood came through, it was remarkable to watch -through tears- the people dealing with that tragedy. You never heard any complaints, you saw neighbors pick up and go help a fellow citizen. It’s what Iowans were about, it really brought back a lot of pride for me. And I tell you, the same thing would happen if it were to occur in Nebraska. Midwestern people, that’s just how we’re raised, there’s a sense of accomplishment beyond self and a sense of responsibility beyond self. So I’d lump the two together as far as what they believe in.

Q: So when you arrived, where you a rush end or outside linebacker from the get-go?

Q: And speaking of, it must have been your senior year, the Colorado game when we played them there, if I recall, one of the first plays of the game I remember you got into the backfield and you sacked Kordell Stewart. And when you got up from the turf you said something to Kordell.  A few days later in the weightroom I asked what you had said to him. Do you remember what that was?

TA: Geez, I don’t want to misquote myself. (laughs) It wasn’t something that will embarrass me now, is it?

TA: Yeah, that’s probably right along the lines of what I was thinking. Generally, the message I always wanted to send was that “for 4 quarters we were going to be playing with that energy, that sort of effort, and we’re not going to let up. So it wasn’t going to be getting any better than right now.” That’s what we were trying to accomplish. Whether on offense of defense, we wanted to our opponents to know at the end of the game that if they were in the ball game that we were planning on playing every single play to the utmost.

Q: So you had Coach Samuel as a position coach. Would the coaches encourage that type of psychological warfare or was it mainly just teaching technique?

TA: I certainly don’t want to paint a picture that there wasn’t impact from a psychological standpoint, as the coaches had us prepared for the game. I think that stuff’s probably more internal. You either want it or not.

I cared deeply for Coach Osborne, for Tony Samuel, and deeply for Charlie McBride… I like to win, and I’m a poor sport when it comes to losing, and we put so much into it. For instance, if you fly all the way to Boulder, put up with that nonsense, we might as well win, you know? (laughs) I don’t recall ever, ever putting on my uniform at Nebraska and even walking out to the field and thinking ‘We’re gonna probably lose.’ And I have to credit the coaches for that.

Q: How would you say they built upon that culture? How was it instilled?

TA: It was just how you went to work. It was the expectation from the day you walked on campus, there was level of excellence that was just kind of understood, it wasn’t hoped for or aspired to, it was expected and it’s just what we did, it’s who we are, it’s the way we worked and cared for each other. I’d assume that was put in place by Coach Osborne and the coaching staff. And we met it and tried to exceed it.