Stryker: Will fluky start be prelude to better days ahead? 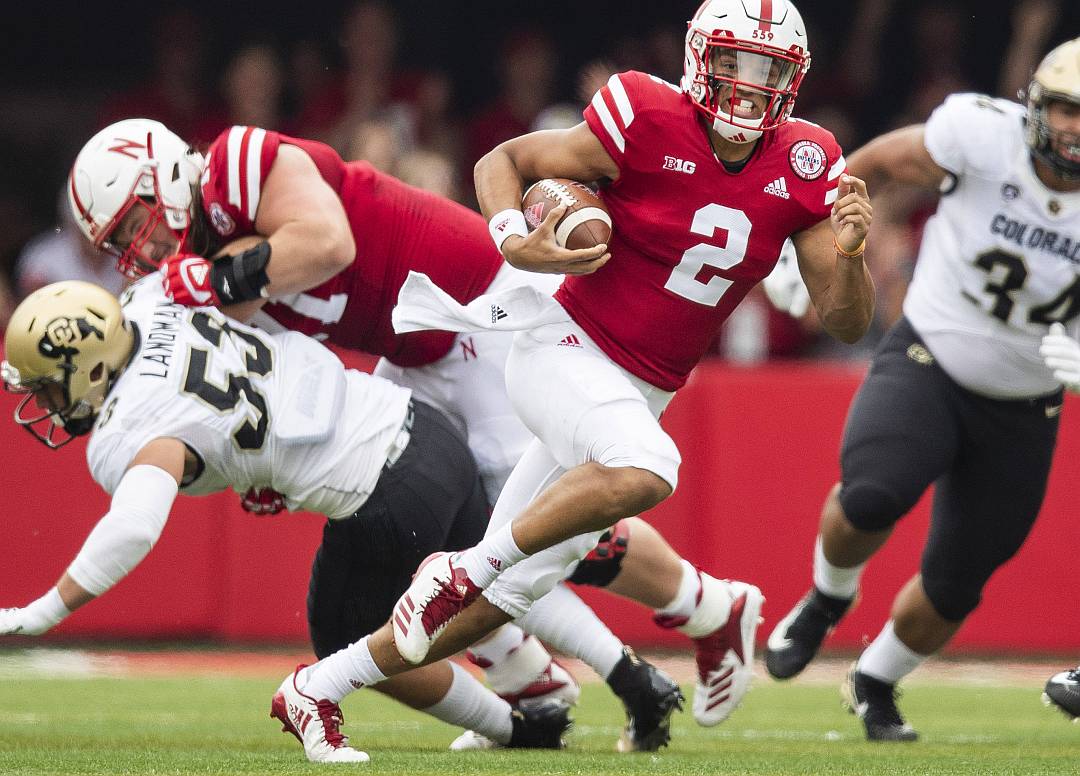 Courtesy Nebraska Athletics
Adrian Martinez on a first-half-run.
By Tad Stryker on 9/8/2018

And so the Scott Frost era begins with an unlikely double false start.

Nebraska showed tremendous potential and made some absolutely killer first-game mistakes, while Frost became the second man in more than a half century to lose his first game as Cornhusker coach. CU came from behind in the final two minutes Saturday to edge the Big Red, 33-28, sending a vocal crowd of 89,853 home disappointed but optimistic.

Ultimately, this weather-delayed, much-anticipated first game of the 2018 season slipped through the usually sure hands of the two wide receivers widely regarded as the best on the Nebraska football team.

Freshman quarterback Adrian Martinez was electric but erratic in his first outing, and suffered an apparent knee strain late in the game, which kept him on the sidelines for the dramatic final plays. Before leaving, he completed 15 of 20 passes for 187 yards, one touchdown and one interception. He ran 15 times for 117 yards and two touchdowns. He and running back Greg Bell also lost first-quarter fumbles, which put NU behind 14-0 early.

Missing the opportunity to play the Akron game probably was a factor in NU’s slow start. It was a learning experience for the team, but also for the Husker fans, who slogged through a first-half learning curve as they struggled to reintroduce words like “blitz” and “sack,” and phrases like “pass rush” and “tackle for loss” into their vocabularies. Everyone was rusty, except the Husker marching band.

It didn’t seem like it at the time, but the Huskers’ biggest mistake was preseason all-conference receiver Stanley Morgan’s inexplicable drop of a perfect Martinez pass in the end zone on the final play of the third quarter. Last season, Morgan had more receiving yards than any Husker in history. If he had caught this one, it would have been a 31-yard scoring play to put Nebraska up 35-27.

Morgan was not the best receiver on the field; that honor goes to CU’s Laviska Shenault, a 6-foot-2, 220-pound sophomore who caught 10 passes for 177 yards and a touchdown. Shenault was the difference-maker on this day, but I saw plenty to like about Nebraska’s effort and even more about its future.

So many things went right, considering that NU was using a new system with an all-new coaching staff, and was playing its first game against a team that had the benefit of a shakedown cruise seven days earlier against an outmanned Colorado State squad. For starters, there were no significant offensive line injuries for the Huskers. Martinez looked poised for much of the game. The defense put out more energy in one game under Eric Chinander than it did over an entire season under Bob Diaco.

The Huskers looked comfortable operating their new offense at what appeared to be about one notch below high gear. They ran 83 plays for 565 yards and had great success running the ball, especially in the first half, when they rushed for more yards than in any single game last season, reeling off 243 on 35 carries. They ended with 329 rushing yards. It’s likely been decades since Nebraska lost while rushing for more than 300 yards. That’s not normal.

Then again, neither is getting a game wiped out by lightning.

Yeah, it was quite a fluky start to the season.

More reason for optimism: Nebraska’s defense was promising, holding the Buffs to just 44 rushing yards. It was steadier than I expected, and it produced disruption, as forecast. Its downfall was its failure to get a single takeaway.

The Husker front seven looked golden, making 14 tackles for loss, including seven sacks, and the secondary was decent, although it failed to make any big plays. But there again, one of its most experienced members made a killer mistake when a personal foul by safety Antonio Reed on third-and-long extended Colorado’s winning touchdown drive.

Plenty of other things went wrong, including three turnovers, and 11 penalties for 95 yards, many of them on special teams.

So there are clouds to start the season, with possibly a silver lining behind them.

“I told the team I’m proud of them,” Frost said aftert the game. “I’m broken hearted for them, but proud of them.”

It will become a prouder team if it learns how to be consistent. It shows a lot of promise, if Martinez can stay healthy. And Frost spoke briefly about the injury in the postgame press conference.

“It’s semi-encouraging,” Frost said. “We’re going to wait before we talk about it until the doctors and everything see what it looks like.”

After the departure of Martinez, walk-on Andrew Bunch seized his opportunity and did a respectable job, completing four of nine passes for 49 yards in a dire situation. In fact, if sophomore receiver J.D. Spielman, who may be among the top five players on the team, doesn’t drop Bunch’s on-target third-and-16 pass, it would have given the Huskers a first down in Buffalo territory with less than three minutes remaining, and Nebraska probably hangs on to win the game.

After Colorado took the lead on Shenault ’s 40-yard TD catch, Bunch moved the team downfield in the final minute, but overthrew an open Morgan in the corner of the end zone on the next to last play of the game.

Frost is encouraging in his words, yet brutally honest when necessary, and I like that.

“I think we made some undisciplined plays, and that’s what average teams do,” he said. “When you’re trying to become a good team, you don’t find ways to lose games like this one. You find ways to win.”

Frost should also take some blame for the loss. He mismanaged the game clock in the final three minutes when CU chose not to call time out after Husker running plays, and on at least two plays, he had the opportunity to let the play clock bleed away to under five seconds. Instead, he allowed his team to snap the ball early in the play clock. With a backup quarterback in the game, it seemed like the right moment to slow down the fast-paced attack. That said, draining 40 or 50 more seconds off the clock still might have left CU with just enough time for its winning TD pass.

Colorado quarterback Steven Montez was excellent, the Buffs played a clean game, had half as many penalty yards as Nebraska, did a better job on fourth-down conversions and deserved to win the game. The Huskers — experienced veterans and raw freshmen both — need to learn from this frustrating launch and move on.

This, the first team of the Frost era, will not be defined by how it started, but how it finishes.