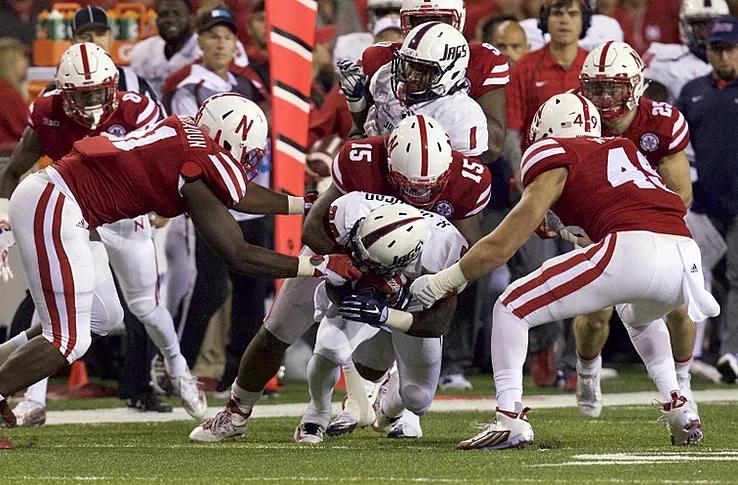 With three starters standing on the sidelines, the Blackshirts’ health took an uptick Saturday night against South Alabama. Small wonder – they had their heart back.

Nebraska’s 48-9 victory over USA went about as well as it should have. The offensive line showed some promise, springing Terrell Newby for 198 yards and three touchdowns. Sophomore placekicker Drew Brown made both his field goal attempts and the Huskers went plus-two in turnovers in Mike Riley’s first win as Nebraska head coach. It was a prime-time scrimmage, and it was good to see the second-team offense and defense get some valuable reps.

Fully recovered from a knee injury that cost him the entire 2014 season and back from his one-game suspension that kept him out of the Brigham Young game, Michael Rose-Ivey covered the field and restored some order. His value far exceeds the 10 tackles and one quarterback hurry that show up in his stat line. He’s one of those athletes who makes everyone else better with his confidence and leadership. The Huskers are much better on defense with MRI scanning the field.

Rose-Ivey, Nathan Gerry and Malik Collins are the Huskers’ best defensive players at each level, and all three played vital roles in holding the Jaguars to nine points. With Josh Banderas (groin injury) and Dedrick Young (foot injury) watching from the sidelines, Nebraska held the 1-1 Jaguars to 19 yards rushing and 332 yards of total offense.

In a flip of the preseason script, linebacker may turn out to be a strength and the secondary a weakness for Nebraska. That is largely due to Mark Banker’s scheme, which is designed to be strong against the run and depends on physical man-to-man coverage by the cornerbacks. The defensive line is about what we figured it would be – strong up the middle, lacking speed on the ends, which puts more pressure on the defensive backfield. If Freedom Akinmoladun can make himself into a pass rushing threat, Nebraska could become much harder to deal with.

Rose-Ivey is Nebraska’s best tackler. He seems to be a natural middle linebacker. It will be interesting to see how he and Banderas work together. Nebraska will need both operating at high efficiency as it navigates an 11-game stretch without a bye week.

On offense, despite missing two tight ends, the Huskers appeared to be in a comfort zone. They mixed the run with the pass and averaged 7.5 yards per play. But this was South Alabama. Things won’t be quite as smooth Sept. 19 at Miami. The Hurricanes’ Brad Kaaya will get his passing yards, because so far, the Husker pass rush is not impressive and neither is its secondary. If they can handle freshman running back Joseph Yearby (146 yards and three touchdowns against Florida Atlantic) and make the Hurricanes one-dimensional, they can win on the road, although I think neither team will hit the 30-point mark.

Points were not a problem against USA. Offensive coordinator Danny Langsdorf started the game determined to give his first-string I-back a chance to get a feel for the game. Newby carried the ball 28 times, including six on Nebraska’s first series. Nobody but Newby carried the ball more than three times against USA, but I think Tommy Armstrong will have to use his legs as well as his arm to beat Miami.

There were no turnovers or penalties by the Nebraska first-team offense, and Armstrong made good decisions, including several checkdown passes. Riley and Langsdorf are still feeling out what works, but thankfully they agree that a running game is at least as important as the passing game. As they go through their first Big Ten season, hopefully they’ll understand that it’s more important.

The Huskers have yet to develop an identity under Riley. To be successful in the Big Ten West, that identity needs to include a strong running game and a solid run defense. With their heart back, the Huskers’ run defense looks much improved from last season. What about the ground game?

There’s no reason the Huskers can’t run for at least 200 yards a game, because they have a creditable passing attack with which to threaten opposing defenses. So far, injuries have hit Nebraska harder and faster than anyone expected, but they have not touched the offensive line. The Huskers can only hope that trend continues.

Formerly the sports editor at the North Platte Bulletin and a sportswriter/columnist for the North Platte Telegraph, Tad Stryker started writing for this website in 2008. You can e-mail him at tad.stryker@gmail.com. Stryker is a freelance writer, favoring topics related to Nebraska history or Christianity. You can buy his recent book at this link.