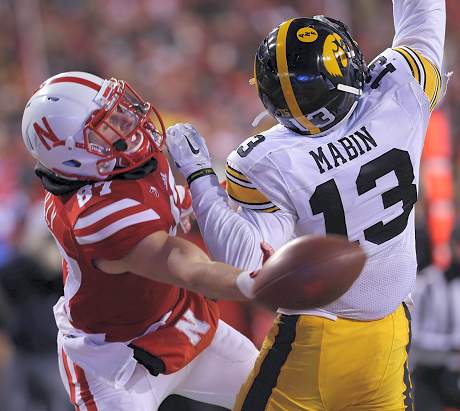 Reese Strickland-USA TODAY Sports
Nebraska receiver Brandon Reilly and Iowa defensive back Greg Mabin fight for a fourth-down pass in the end zone in the fourth quarter.
By Tad Stryker on 11/27/2015
Never underestimate the value of a quarterback who doesn’t beat himself and a defense that does not allow big plays. They made all the difference Friday as Iowa won its 12th consecutive game and kept itself in the hunt for the College Football Playoffs with a 28-20 win over Nebraska.

The Hawkeyes were impressive in their refusal to buckle under the pressure of 90,000 fans and a national spotlight in Lincoln. While they brought along plenty of fans (I’d estimate at least a tenth of the crowd was Hawkeye fans), they faced enough adversity to battle-test them for next Saturday’s Big Ten Championship game at Indianapolis.

If nothing else, Iowa proved against Mike Riley what other teams proved against Bo Pelini over the last three seasons. A team that has comparable talent to the Big Red will usually win if it simply follows a conservative game plan and counts on the Huskers to beat themselves. That plan rarely fails.

The Huskers (5-7 overall, 3-5 Big Ten) did not become more disciplined under Riley than they were under Pelini. They finished the year as one of the most penalized teams in the nation, with one of the worst turnover margins in the nation. In fact, they took inefficiency to new heights Friday at windy, cold Memorial Stadium. They outgained Iowa 433-250 and ran almost twice as many plays from scrimmage, but couldn’t finish enough drives. The usual suspects, turnovers and penalties, were the main problem.

Iowa is undefeated largely because it has become so good at recruiting and developing offensive linemen. But Nebraska’s defensive front played the Hawkeye o-line to a standoff and then some. On this day, the difference was this: Iowa has a quarterback and a coaching staff with more patience and maturity than does Nebraska.

This game was a contrast in the two junior quarterbacks. As they have so often this season, Husker offensive coaches lost faith in their running game and entrusted the outcome to the passing arm of Tommy Armstrong Jr. and, more importantly, his judgment. It was a fatal error.

In a contest between Iowa’s Mr. Efficiency, and Nebraska’s Mr. Unpredictable, it was C.J. Beathard who came out ahead. Armstrong ruined his team’s chances by throwing four interceptions, including a ridiculously easy pick-six by Hawkeye freshman defensive end Parker Hesse – the player who filled in for injured Drew Ott – that gave Iowa a 14-7 lead midway through the second quarter. That gift touchdown was the difference in the game. But it wasn’t the only reason Beathard was more effective than Armstrong.

Armstrong’s interception-every-quarter outing proves his judgment has not improved much after a year of tutelage from Riley and offensive coordinator Danny Langsdorf. His development – or lack thereof – will be the subject of a future column. For now, let it suffice to say that Langsdorf’s judgment has not improved much over the course of the season, either. No, Langsdorf didn’t throw any interceptions, but he could not figure out a way to help his quarterback play within himself.

This season, Iowa wins because it eschews “cool” and is satisfied with “effective.” Under Langsdorf, Nebraska’s offense tried to be both cool and effective, but often accomplished neither. If this were a basketball team, the Huskers would be the club that chucks off-balance 3-point shots, turns the ball over and can’t figure out a way to get to the foul line. Iowa is the team that patiently sets up open midrange jumpers, hustles for garbage points on the offensive boards and hits most of its free throws.

Give the Huskers credit where it’s due. They outgained Iowa 433-255. Maybe they get a gold star for “cool,” after all. Their offense has way more bells and whistles than Iowa’s, but scored only two touchdowns. The Hawkeyes made them drive the field on every possession, never giving up a big play. I wonder how much enjoyment the Huskers get when they place their bells, whistles and yardage total on the scales and weight it against their seventh loss of the season.

It ’s puzzling why a series of two or three short gains on running plays so easily scares Langsdorf away from the run when a series of three incompletions, or even a catastrophic pick-six, doesn’t seem to scare him away from the passing game. That pattern has played out for the entire season, not just this game. Langsdorf has little patience with a running game that, had it been nurtured this fall, would easily have yielded two more wins, and possibly more. Meanwhile, Langsdorf has much more patience with a passing game that has been at least as undependable as the running game.

In effect, Langsdorf said “Thanks, but no thanks” to senior fullback Andy Janovich, who was underutilized Friday against the Hawkeyes, with no carries and not nearly enough plays as lead blocker for Cross and Terrell Newby. Overall this season, I credit Langsdorf for finding better ways to use Janovich than did his predecessor Tim Beck, but his neglect of the senior fullback on Senior Day was one more reason the Huskers lost by a touchdown.

Never was this more evident than when Nebraska, trailing 28-17 with seven minutes remaining, faced fourth-and-1 at the Iowa 19-yard line. Surprisingly, Armstrong dropped back and threw to a well-covered Brandon Reilly in the end zone. The pass fell incomplete.

It’s puzzling and concerning why Langsdorf has more confidence iin his team’s ability to get a penalty on a low-percentage fade route in the end zone than he does in his offensive line getting him a yard on fourth-and-1. Riley went to great lengths to explain all the options that were available on that pass play. But why get cute? Why load down your college team with so much complexity on a fourth-and-1 situation?

Riley put up with Langsdorf’s overreliance on the passing game all season long, and as a result, he joins Bill Callahan as the only men in more than a half century to coach the Nebraska football team to a losing record. That’s not the way to promote confidence among the fan base.